In aftermath of deadly brick fall, how safe is the city when it comes to debris? 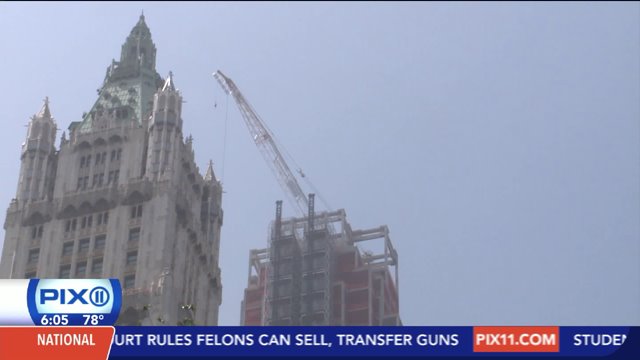 NEW YORK CITY (PIX11) -- There are few out there who have seen the number of buildings in New York City like Stephen Sunderland.

"New York has a bunch of 100-year-old buildings that look pretty good, but when you shine the camera on them, you'll see structural cracks," he said. "The question is: how severe are they and does that impact on safety?"

Sunderland is the managing director of Optimal Spaces, a real estate firm that specializes in tenant representation. The one thing his tenants always want to know? A building's integrity, as he pointed out to PIX 11 News.

In light of Sunday's tragic incident on the Upper West Side where a falling brick resulted in the death of a 2-year-old girl, PIX11 News spoke with Sunderland as well as others about the challenges of the city's aging infrastructure as well as oversight of buildings and what is being done to make the city safer.

The New York City Department of Buildings says there have been 313 injuries between 2009 and 2014 caused by debris. According to a spokesperson, this can range from a piece of a facade to a construction tool or even material falling. Fatalities were a result in nine of the cases. It should be noted that the stats cover both on and off construction sites.

This said, how common are pedestrian incidents?

"Pedestrians are a little rare. It is something that we are reading about in the news a lot lately but it is not something you see very often," said Stephen Murphy, a trial attorney with the firm of Block, O'Toole & Murphy.

Murphy's firm specializes in accidents where pedestrian and construction workers are struck by debris.

"New York City and New York State is one of the more safe areas in terms of construction activity. It is somewhere in the neighborhood of sixth and 10th safest in the entire country," Murphy said.

When asked whether or not the city has seen a bit of an uptick in recent years, Murphy quickly points out: "We have and that is going to come with the increase construction activity that is taking place, particularly across New York City, there is construction everywhere you look."

One of the challenges, according to Murphy? The number of inspectors that OSHA has available.

"In New York there is somewhere between 105 and 115 inspectors," he said. "If they inspected every single job site in New York state, it would take them more 105 years to accomplish that."

New York City Council Member Vanessa Gibson is the Chair of the Committee on Public Safety. Gibson shared with PIX11 News that from time to time in some she is aware of her surroundings when moving around the city.

"If I am in an area where there are a lot of talk skyscrapers and it's windy, sometimes I do tend to look up as I am walking," she said.

Gibson also weighed in on Mayor Bill de Blasio's announcement five days ago that the city's Department of Buildings is adding 320 positions and investing $120 million over the next four years to enhance service, safety and oversight.

"I'm pleased. It's a step of progress. It moves us in the right direction, but we have much further to go," she said.

However, Sunderland adds that at the end of day, once a problem has been identified, the financial motivation behind this current building boom tends always produce the following:

"Usually the only question is, how long will it take and how much will it cost," he said.