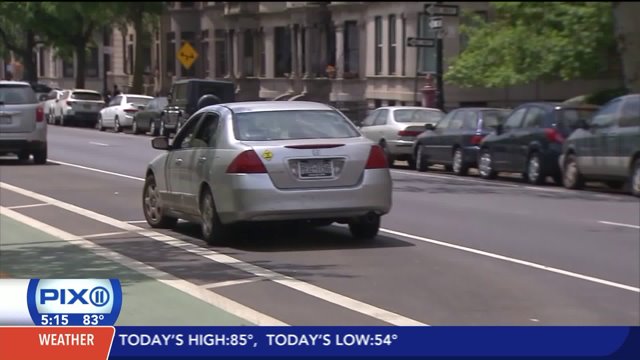 "Even though it looks like you can park here, you`re not allowed to park here. Did you know that?" Greg Smithsimon asked a driver Tuesday morning.

PARK SLOPE, Brooklyn (PIX11) -- “Even though it looks like you can park here, you’re not allowed to park here. Did you know that?” Greg Smithsimon asked a driver Tuesday morning.

“No,” came the obvious response.

Smithsimon is making it his mission to warn drivers about a small strip of would be parking spots near 9th Street and Prospect Park West. He’s putting flyers on windshields and talking to drivers to try and save them from a fight with traffic cops.

"I was looking at the top sign, I didn't even notice the bottom one," said driver Sylvianne Tulsi.

About a year ago the Smithsimon, a Brooklyn College professor, left his car in one of the spots only to find it ticketed when he returned.

At first he kicked himself for not reading the sign properly. But after biking by the same strip day after day Smithsimon noticed he wasn’t alone. All four spots were usually occupied and about half the time cars were ticketed.

“And so I knew there was a problem with the way the place was designed with people getting trapped.”

Smithsimon searched city data and found that over six months more than 600 drivers were ticketed for parking in just these four spots. At 115-bucks a pop, that’s a total haul of 72-thousand dollars in fines for the city.

To put that into perspective, cars parked in the bus stop just across the street received less than 50 tickets over an entire year.

The Department of Transportation says it reserves the spots for park employees so they can set up for events during the summer. But after learning about the number of tickets, a spokesperson for the DOT says the restrictions and signage are under review. Many people who live in the area say the signs need to be more clear.

“This is a very, very, very deceiving situation,” said K.C. Comerford who received several tickets for parking in the spots in the past.

“Given that I live here I would look at that sign and interpret it that you can park here," said Park Slope resident Marcellene Hearn. "I mean it does, it says “No Standing” there. So it’s confusing at the least.”