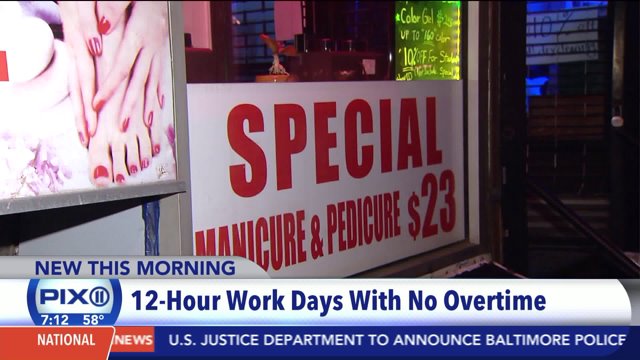 NEW YORK (PIX11) -- Nail salons are a multi-million dollar business in New York City, but the ubiquitous shops that pamper their guests are paying their workers nearly nothing, according to a bombshell report that reveals egregious and widespread labor practices that could be considered illegal.

The New York Times' disturbing report titled "The Price of Nice Nails" exposes just how bad conditions are inside these salons -- from the very cheap to the ritziest.

The Times interviewed more than 150 nail salon workers and owners, in four languages, and found that a vast majority of workers are paid way below minimum wage and sometimes are not even paid at all, especially during their first few months of training.

Workers said they endure all types of humiliation, including having their tips docked as punishment, constant video monitoring by owners and even physical abuse. Employers are rarely punished for labor and other violations.

Some employees, who clip, primp and polish finger and toenails, said they were paid just $1.50 an hour -- significantly less than New York's $8.75 minimum hourly wage -- during a 66-hour work week, with no overtime. On slow days they were paid nothing at all.

According to some of the workers, they were not only underpaid, but also kicked as they sat on pedicure stools and verbally abused.

The Times investigation reveals this behavior is happening across the five boroughs, Long Island and Connecticut, including in the wealthier pockets of the region.

These low wages are doled out despite the fact that the business seems to be booming, with the average price of a manicure hovering around $10.50. The number of salons in New York City alone has more than tripled over a decade and a half to nearly 2,000 in 2012, according to the report.

Out of 300 nail shops interviewed, just three spoke of salons that appeared to obey the letter of the law when it comes to compensation.

How to be a responsible customer: