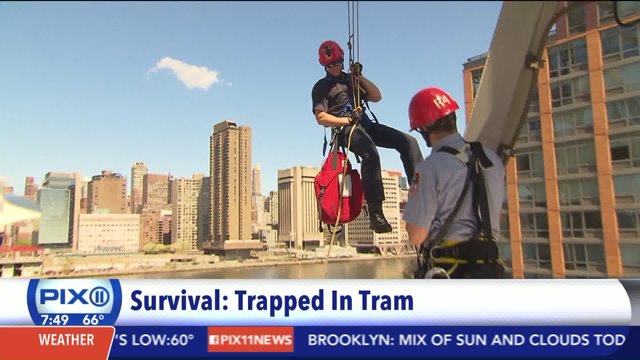 NEW YORK (PIX11) -- It's video of a training mission you just have to watch.

Members of FDNY's Rescue 1 and Rescue 4 took PIX11's Dan Mannarino and photographer Kenton Young up high above the East River for a training mission.

They are practicing for a catastrophic failure of the Roosevelt Island Tram Car that would stall the car in place, dangling high in the air. Their mission is to rescue everyone on board and get them safely to the ground below.

Back in 2006, the tram became stuck with dozens of people on board. In that case, the FDNY used a diesel-powered bucket to rescue those onboard. Since then, the tram has undergone a $25 million renovation that changed how the tram works. Therefore, these firefighters train for how to safely rescue those trapped without the use of one of those diesel buckets.

Watch the above story, where five different camera angles show you the daring rescue mission. A big thank you to the brave men and women of the FDNY.