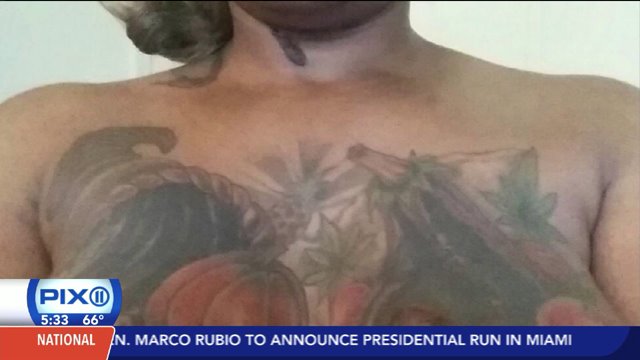 HARLEM (PIX11) - Yet another woman has filed suit against the popular reality-show tattoo parlor in Harlem, Black Ink.

Loni Tate, 31, told the New York Daily News she went to the Lenox Ave. location in January of 2014 after becoming a fan of VH1's "Black Ink Crew."  Excited for the rose tattoo she had planned for her forearm, she never imagined her new ink would land her in the hospital, leaving her permanently scarred, she said.

She told the news site she thought it was odd when her artist, Kelvin Cepeda, abruptly stopped after three hours on the design, saying that he had to attend "an event."  When she returned to finish the design, she says she noticed the tattoo gun was already set up -- in the past she had always watched as they opened the new needle in front of her.

She left Black Ink happy with her new tattoo; it wasn't until three days later that the pain started.  Alarmed, she says she texted Cepeda but was told not to worry, that she should just wait a couple of days.  She said it felt like her arm was on fire, and soon the beautiful flower began to swell and ooze puss as the infection worsened.

Tate is blaming the awful infection and four-day trip to the hospital on a dirty tattoo pen, and is suing Black Ink for an unspecified amount.

"The young lady had an infection that's due to not covering and treating the tattoo but wanted to blame the shop.  She withdrew after her first attempt at a lawsuit but after seeing the news report decided to take that route."

The shop says Tate initially filed a lawsuit in January of 2014, but then withdrew before refiling this year.

Her lawsuit comes after another woman says she was disfigured when a massive chest piece (NSFW images) done by a Black Ink artist scarred badly, and now itches and burns daily.

EXCLUSIVE: Woman says Harlem tattoo parlor behind ‘Black Ink’ left her disfigured
Black Ink responds to woman’s lawsuit: Tattoo problems are your fault, not ours
Copyright 2020 Scripps Media, Inc. All rights reserved. This material may not be published, broadcast, rewritten, or redistributed.