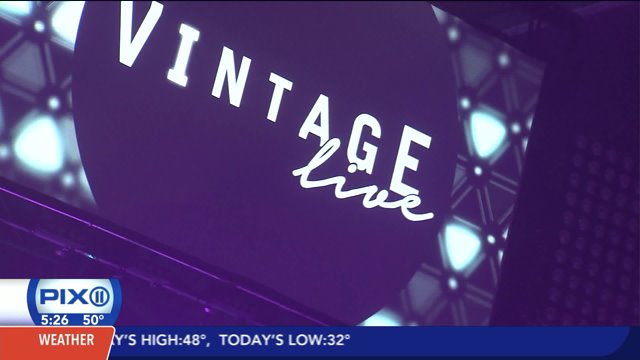 Music phenom Gregory Charles isn`t your average musician. The Montreal import is a self-proclaimed music maniac who`s up for just about any challenge in his epic interactive show Vintage Live, now playing in New York.

“People come to the show, they fill out a musical profile, they log on to our matrix and they tell us what to play,” Charles said, explaining what his show was about.

Best described as a piano bar on steroids, Vintage Live unravels each night inside a state-of-the-art pop-up theater right along the Hudson at Pier 97.

The obscenely gifted Charles presides over the evening, receiving real-time requests right on his piano that cover a wide spectrum of genres.

There’s no such thing as an obscure song to the musical genius who has covered over 10,000 songs with his band in concert over the course of 15 years.
What he and his band manage to deliver every night could transform even the most cynical audience member into a believer.

“It’s so much fun because it’s so unpredictable and at the same time it is predictable for that one person -- at a time,” he said. “That one person who asks ‘I’m going to ask this and then bang they see their name on our big screen and we start playing the song.”

“The reason why we’re so good at what we do is because a lot of us on stage are geeks and we listen to [everything].”

Vintage Live is playing through May 2 on Pier 97 at Hudson River Park (57th Street and West Side Highway). Showtime is 8:00 p.m. Tickets (advance only) are priced at $49 & $79 (general), $69 (group) and $149 in The Club (VIP includes Montreal-inspired culinary experience, two cocktails and an exclusive backstage visit).

Tickets can be purchased at http://www.vintagelive.com .