It’s a “G” Thing: Craft beers, fresh food and a way to help animals are all on tap at Yonkers Brewing Co. 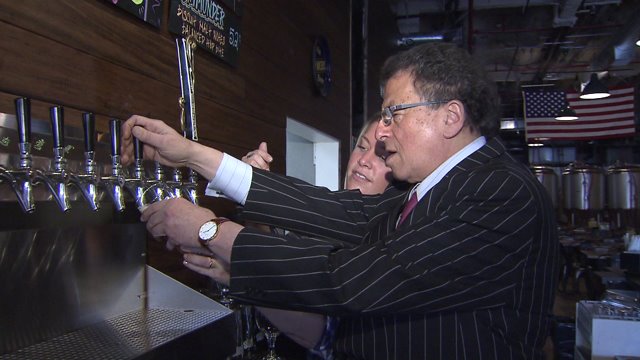 In this week`s It`s a "G" Thing, PIX11`s Mr. G visits one local brewery serving up craft beers, fresh food and a way to help animals.

From lagers to stouts to IPAs, something's brewing up in Yonkers.

“Nectar of the gods as we like to call it!” Nick Califano said.

“Right now we have about eight different brews in those tanks," Califano said. "Each tank holds a different beer.”

“What makes you happy about the job?" I asked Taleb. "Just the creativity, all the different options, so many different styles that we can do, and flavors we get to work with over here.”

The new watering hole just opened up in January after a successful Kickstarter campaign.

“Yonkers was missing that sense of community down on the waterfront," Califano said. "We wanted to build something where we could feed people and give [them] a great experience.”

Owner Nick Califano and his partner John Rubbo started the business five years ago after leaving their corporate jobs.

"We had the opportunity to fall back on what was once a hobby," Califano explained.

A hoppy hobby that dates back to when they were kids.

“Started making wine with our grandfathers in the basement when we grew up, you know two Italians from Yonkers," he remebered. "And then it turned into beer.”

Once the duo decided to open up shop, they knew just the spot; the former Yonkers Trolley Barn.

"Since that time, this space had nothing," Califano explained. "We’re actually the first business in here since the trolley.”

This brewery's about more than just creating first rate froths.

It gives the community a taste of its success through its tours.

“We just let everyone know that the tour is free," Jackie Rubbo, Director of Creative, Culture and Chaos, said. "But if anyone wants to donate to Building Hope for the Yonkers Animal shelter, all donations go straight to the animal shelter.”

We visited the animal shelter to see how the money's helping.

"We will be adding more runs," Dr. Kay Pistone Carucci, President of Building Hope, said. "We’ll be working on lot of new  projects and we’re delighted that the brewery has been adopting us.”

Back at the bar, I learned first hand how to pour the perfect pint.

And no matter how bad I am at this, it seems fun times here are always on tap.