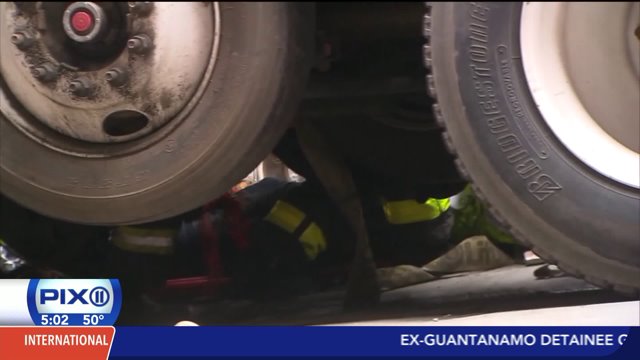 A construction worker has died after a crane crashed on the East Side just before noon Friday, according to FDNY.

MIDTOWN (PIX11) --  A man was simply doing his job, when suddenly something went wrong with a piece of equipment he was using and it killed him.  The tragedy has investigators probing the east Midtown construction site where it happened as well as the site's contractor, which has a long and growing history of violations and complaints.

The industrial accident happened just before noon Friday.  A crane arm, called a knuckle boom, which was set up on the front of a flatbed truck, apparently malfunctioned, according to the fire department chief on scene, Joe Carlsen.

The boom is designed to move heavy building materials from the flatbed onto sidewalks at construction sites.  The boom operator, a 40 year-old man, according to investigators, stood next to the boom, apparently trying to figure out why it wasn't working properly.  Suddenly, its arm slammed down on him.

"I got to see [the] guy," said Fernando Vajanadiaz, an eyewitness.  "His back, his legs [were] hanging."

"The guy was still holding the phone," said Vajanadiaz, who works in a parking garage next door to the construction site at 219 E. 44th St.  "Probably he was talking at that moment when that happened, when he got caught.  He was still holding [the phone], couldn't move, his face was red."

One eyewitness said the man's head was crushed in from the blow.  He was pronounced dead at the scene.  Some of his co-workers, presumably the ones who knew the man personally, were visibly shaken by the tragedy.

"It's a fellow worker," said John Rendano, a construction worker at a site two doors east of the one where the fatal accident took place.  "All you can do is just say a prayer for him.  That's it."

Indeed, at least one of the dozens of police officers and firefighters responding to the scene made the sign of the cross as the victim's body was prepared to be taken away by technicians from the Medical Examiner's Office.

Other agencies on scene were the Office of Emergency Management and the Department of Buildings.  It's unclear at this point in their investigations if the deadly accident could have been prevented.  What is known is that the contractor for which the victim was working is no stranger to problems.

The main contractor, Flintlock, has in recent years been placed into OSHA's severe violator enforcement program.  Also, at the site of Friday's accident, Flintlock has had 10 violations deemed "immediately hazardous" by the New York City Department of Buildings, and 13 complaints on site, including multiple failures "to safeguard all persons and properties," and doing work well before and well after hours.

Flintlock Construction is a nonunion contractor.  While that on its own doesn't necessarily mean the company is unsafe, Councilmember Garodnick said: "There is no question that the safety protocols that are in place in the sites that are union shops are generally more complete than the non-union shops.  But we don't know if that was a factor here."

The complaints against Flintlock at the East 44th Street worksite have been resolved with the city.  When PIX11 News contacted the company, which is based in Midtown, the person who answered the phone said that nobody at the firm had any comment.