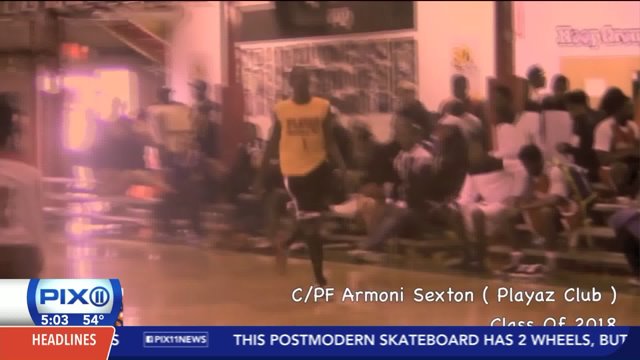 Residents of Paterson are mourning a 15-year-old killed in a drive-by over the weekend.

PATERSON, N.J. (AP/PIX11) — A rising high school basketball player was killed and at least three other people were wounded in a drive-by shooting in New Jersey over the weekend, authorities said.

Police said the shooting occurred about 8:30 p.m. Saturday in the area of Rosa Parks Boulevard and Godwin Avenue in Paterson. They say the victims were standing near a liquor store when a burst of gunfire came from a vehicle that quickly fled the scene.

Killed in the shooting was 15-year-old Armoni Sexton, a top scorer and rebounder on the varsity team at the Paterson Charter School for Science for Science and Technology.

"He was a phenomenal person," coach Kiela Brevard told PIX11. Brevard described Sexton as the "heart and soul" of the team.

"We won a championship game recently and he did not play because he was sick but he fought with us to win," Brevard said.

Sexton had his sights set on the NBA.

On behalf of the PCSST community, we extend our thoughts, prayers and condolences to the Sexton family. http://t.co/fKt594pPuF—
PCSST (@pcsstk12) April 19, 2015

"We are shocked and saddened to learn of the passing of Armoni Sexton last night," the school tweeted. "On  behalf of the PCSST community, we extend our thoughts, prayers and condolences to the Sexton family."

A motive for the shooting remains under investigation. There have been a spate of shootings in Paterson in recent days, but it's not clear if this incident was related to any of the other shootings.