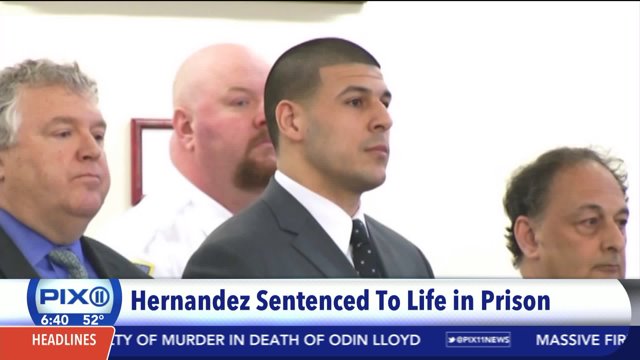 (CNN/AP) -- Former New England Patriots player Aaron Hernandez has been found guilty of first-degree murder and soon after was sentenced to life in prison without the possibility of parole, a jury decided Wednesday.

Hernandez stood impassively as the court officer announced the sentence, hours after a jury handed down its verdict. He was on trial for the shooting death of Odin Lloyd, whose body was found in a Massachusetts industrial park in June 2013. Lloyd was dating the sister of Hernandez's fiancee at the time.

The sentencing was a formality because a first-degree murder conviction in Massachusetts carries an automatic sentence of life without parole.

The 25-year-old Connecticut native also was convicted of unlawful possession of a firearm.

Prosecutors took months to present more than 130 witnesses to build their case. The defense wrapped its witnesses in less than a day.

Prosecutors say Lloyd was seen June 17, 2013, around 2:30 a.m. with Hernandez and Hernandez's friends, Carlos Ortiz and Ernest Wallace, in a rented silver Nissan Altima. Later that day, a jogger found his body riddled with gunshots.

Wallace and Ortiz, who were also charged with murder, have pleaded not guilty, and will be tried separately.

Hernandez's attorney, James Sultan, told jurors that Hernandez "witnessed" Lloyd's killing, "committed by somebody he knew," and that the former NFL player "really didn't know what to do, so he put one foot in front of another" and moved on with his life.

Lloyd, who was working for a landscaping firm at the time of his killing, played football for the Boston Bandits, the oldest semi-pro team in Boston and the winner of four championships in the New England Football League, the team's website says.

Evidence collected in Lloyd's death led to two more murder charges against Hernandez in a separate case in Boston. He has pleaded not guilty. That trail is scheduled to begin in May, but officials say it will be pushed back.