Two NYPD detectives saved the life of a 45-year-old woman who attempted to commit suicide by jumping off the Kosciuszko Bridge Monday. 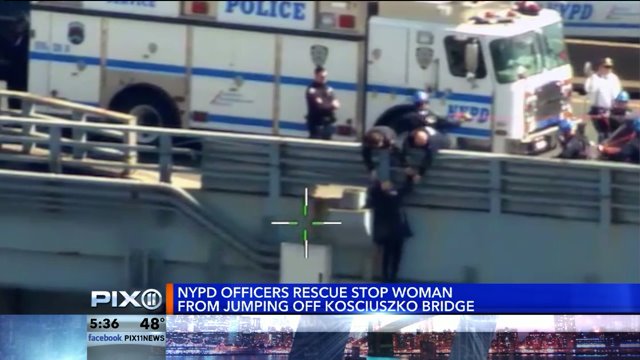 BROOKLYN, N.Y. (PIX11)-- Two NYPD detectives saved the life of a 45-year-old woman who attempted to commit suicide by jumping off the Kosciuszko Bridge Monday.

Detective Meghan Kinsella was conducting a home visit when she overheard a 911 call of a suicidal woman on the Kosciusko Bridge, according to the NYPD.

Cops say Kinsella, who has worked as domestic violence officer for more than nine years, found herself standing next to NYPD Detective Steven Stefanakos, a 24 year veteran.

Together they began talking to the woman.

"I tried to convince her no matter what, we would be with her every step of the way," Kinsella said. "He would talk, I would talk. I didn't even realize I was there for two hours. I was completely focused on her."

Stefanakos mentioned the possibility of her having a family or children, and it was there when he knew he made a critical connection.

Eventually, both of them were finally able to convince the woman to come off the ledge.

In dramatic video, they could be seen reaching over, grabbing her and pulling her to safety.

"It's a huge relief," Stefanakos said. "It is actually euphoric because you made a difference in somebody's life, right there and then."