Gas line may have been ‘inappropriately accessed’ before East Village explosion 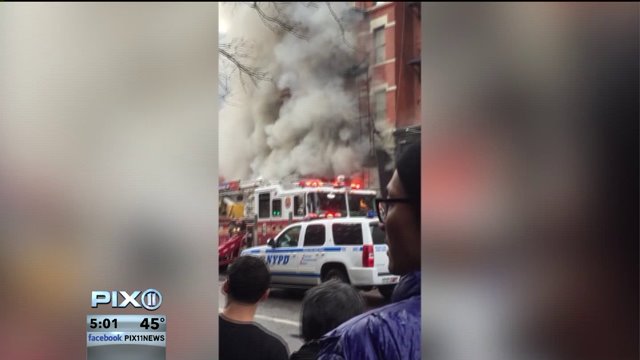 EAST VILLAGE, Manhattan (PIX11) -- The scene that was filled with chaos and then a raging inferno that ultimately leveled three buildings at Second Avenue and 7th Street on Thursday was littered with crime scene tape less than 24 hours later.

The NYPD, Con Ed emergency response and the FDNY all filled the area as the search amidst charred rubble continued with hopes that the two people listed as missing may somehow be under the pile alive.

Mayor Bill de Blasio visited the site Friday morning then held a news conference a few hours later at City Hall.  During the news conference the Mayor discussed the explosion and the potential criminal aspect of it. "There is a possibility here that the gas line was inappropriately accessed internally by people in the building. We don't know enough yet about the details of that."

Vincent Caravello is the president and CEO of Concetti Contracting.  The construction company specializes in construction where a restaurant is involved and has worked around gas lines in the past.  Minutes after getting his first glimpse of the scene, Caravello shared with PIX11 News three specific points of concern. "Three things come into question, one was incompetence. Secondly, sometimes contractors have deadlines that they have to meet and sometimes they rush a job in trying to meet those deadlines. Thirdly, someone wasn't doing their job."

As for Con Ed having produced a failed inspection approximately an hour before the blexlosion, Caravello said, "Their lock was going to the main feed that was being installed, but that doesn't mean that the gas was turned off to the whole entire building and that is what should be investigated, whether the whole building was shut off."