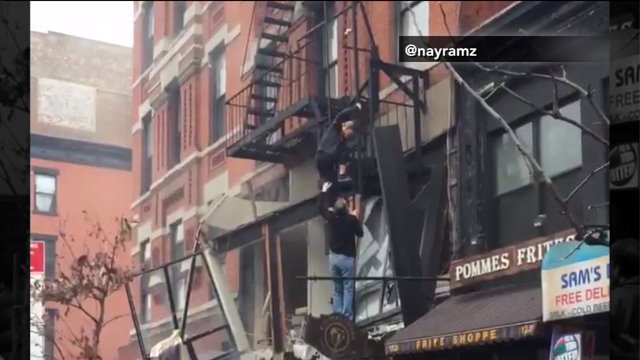 A bystander rushes to the aid of a screaming resident who is desperately trying to flee the building following an explosion.

EAST VILLAGE (PIX11) -- Moments after an explosion tore through an East Village building, a screaming woman found herself trapped on a fire escape, her rescue coming from a man who climbed up to her on a ladder shortly before thick smoke began to billow from the doomed building.

Major explosion on 2nd ave and 7th street. New Yorkers being awesome and helping this young lady get down! pic.twitter.com/YxGh2C68IP

The woman was trapped on a fire escape, seemingly unsure about how to get down as concerned pedestrians scrambled to try to help her. A man then climbed up a ladder leading to the fire escape, extended his hand, and helped the woman down to the sidewalk to safety.

The video of the rescue was taken by Niraj Desai, who goes by @nayramz on Twitter, where he posted the video as well as a followup, which shows the same scene now consumed by smoke. Within the next hour, four buildings would be ablaze in a fire that rose to seven alarms, destroying the structures and  erasing a century-old chunk of the East Village .

After the girl got out, the smoke started getting crazy! pic.twitter.com/bpjlFmCRFK