‘Would he throw his mother in the street?’ Italian American Museum tries to evict 85-year-old Little Italy native 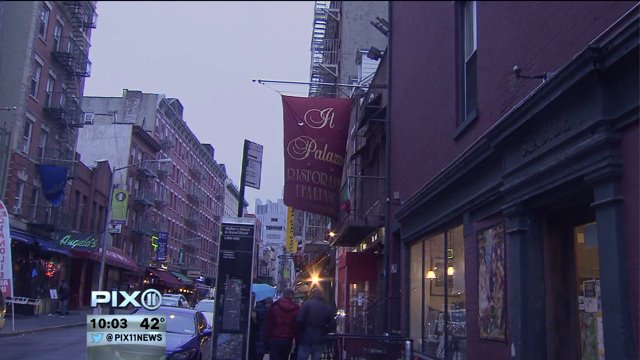 After 30 years in business, owners of Il Palazzo served their final meal in at the Little Italy restaurant Wednesday night.

LITTLE ITALY (PIX11) --  The Italian American Museum in Little Italy has came under fire this week for trying to evict an 85-year-old woman who grew up in Little Italy.

Adele Sarno lives in the Mulberry Street building that was also home to Il Palazzo, a restaurant forced out by the same landlord on Wednesday.  Sarno believes she is being pushed out of her rent-controlled apartment, where she’s lived in since the 1960s.

“How could he be so mean? Would he throw his mother in the street,” she asked. She pays $820 a month for a two-bedroom.

Sarno will go to court next week to contest her eviction. In the New York Times, the museum defended its  actions.  “So the museum should be running a charity or providing residences at discount rates?” said Joe Carella, spokesman for the museum. “That doesn’t match the mission.” The museum's director,Joseph V. Scelsa, told the Times its mission is to preserve the legacy of the neighborhood, whose Italian heritage is vanishing.

But it's too late for the owners of Il Palazzo, who served their final meal at the Little Italy restaurant Wednesday night after 30 years in business.

Following several court fights and rent disputes, the owners were forced out. “My heart is ripped out, I have aches in my stomach,” said Il Palazzo owner Annette Sabatino.

The Italian American Museum sent PIX 11 a copy of a judgment they won in court against Annette Sabatino, and the museum maintains Il Palazzo’s managers owed them hundreds of thousands of dollars.  The museum bought three buildings on the block with the intent of expanding, but is now trying to sell them to a developer and stay on rent free, the Times reports.

Sabatino said Wednesday it was difficult for any restaurant to keep up with the rising rents in Little Italy. “How will I pay $30,000 a month selling $5 dollar pasta?” she asked.