Snow forecast for first day of spring, then cold sticks around 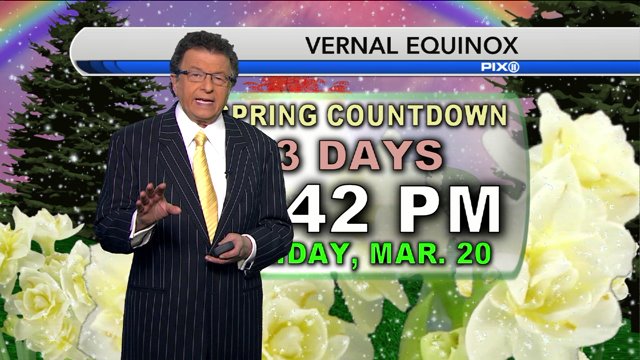 In a word -- unbelievable.

It's going to snow on the first day of spring, and the accumulation north and west of the city could be plowable.

After a mild St. Patrick's Day that started wet and ended with late-day sunshine, Tuesday night will be mostly clear and cold with lows in the 20s. With winds continuing to gust at around 20 to 40 mph, it will feel like the upper teens north and west of the city.

Sunshine will do little to ease the chill on Wednesday. Temperatures will struggle to reach 40 with a brisk northwesterly wind, and the wind will make it feel like the 20s during the afternoon. The winds will ease off on Thursday but it’ll stay chilly with temperatures in the lower 40s.

Spring starts on Friday but Mother Nature will still insist it's winter. A complex system in Texas will start to make its way to the mid-Atlantic states and moves off shore, passing just south and east of the city. Temperatures could be cold enough that some of the precipitation as snow especially across north and west of the city. With the March sun in place, it’ll be very difficult at this point to determine how much snow, if we get any, in the city and coastal sections, but plowable snow is possible inland.

The pattern will then set in for the rest of the month -- cold with no signs of spring weather in sight. It's looking like a short spring, alas.