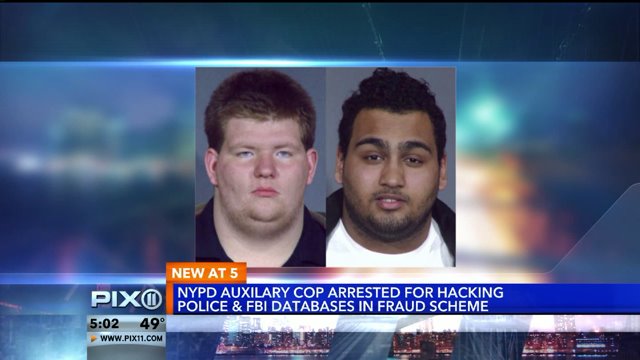 NEW YORK (PIX11) -- A New York City Police Department Auxiliary Deputy Inspector was arrested after authorities say he hacked into a restricted NYPD computer and other sensitive law enforcement databases in attempt to have access to names of those involved in traffic accidents.

Police say 45-year-old Yehuda Katz was taken into custody Tuesday morning. His first appearance is in Brooklyn this afternoon. Katz was assigned to the 70th Precinct in Brooklyn.

“The defendant allegedly used his position as an auxiliary officer to hack into restricted computers and networks in order to obtain the personal information of thousands of citizens in a scheme to enrich himself through fraud,” stated United States Attorney Lynch. “The threat posed by those who abuse positions of trust to engage in insider attacks is serious, and we will continue to work closely with our law enforcement partners to vigorously prosecute such attacks.”

According to the complaint, the defendant surreptitiously installed multiple electronic devices in the Traffic Safety Office of the NYPD’s 70th Precinct that allowed him to remotely access restricted NYPD computers and law enforcement databases, including one maintained by the FBI, that he did not have permission to access.

One of the electronic devices installed by the defendant contained a hidden camera that captured a live image of the Traffic Safety Office and was capable of live-streaming that image over the Internet.

The second electronic device was connected to one of the computers in the Traffic Safety Office and allowed the computer to be accessed and controlled remotely.

Investigators determined that the devices had been used to allow the defendant to remotely log onto an NYPD computer using usernames and passwords belonging to NYPD uniformed officers.

Thereafter, the defendant ran thousands of queries in databases, including a restricted law enforcement database maintained by the FBI, for information, including the personal identifying information of victims, related to traffic accidents in the greater New York City area.

The complaint further alleges that, after the defendant accessed the NYPD computer and law enforcement databases, he contacted individuals who had been involved in traffic accidents and falsely claimed to be, among others, an attorney with the fictitious “Katz and Katz law firm” who could assist them with potential legal claims.

Letters sent by the defendant to accident victims included claims such as “I can advise you with 100 percent confidence that I can resolve this claim in your favor,” and “My fee is 14 percent only when you collect. And I know that you will collect.”

Between May and August 2014, the defendant ran over 6,400 queries in sensitive law enforcement databases that he accessed remotely via the compromised NYPD computer for information related to traffic accidents.