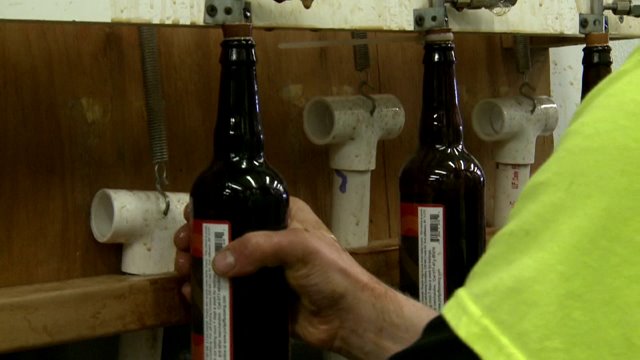 Beer isn`t just a drink some people relax with after work, it`s also a $100 billion industry. And for Mike Philbrick and the boys over at Port Jeff Brewing Company beer is work, but it wasn`t always that way.

Port Jefferson, N.Y. (PIX11) -- Beer is not just a drink some people relax with after work. It's a $100 billion industry, and for Mike Philbrick and the boys over at Port Jeff Brewing Company, beer is work.

But it wasn't always that way.

"Well I was a hobbyist and that hobby got a little bit out of hand to the point where I was brewing two or three times a week," Philbrick said.

Mike's story is no different from thousands of other craft brewers across the country who been filling your supermarket shelves and bar taps with Porters, Stouts, and IPAs just to name a few. In fact, the number of microbreweries on Long Island has doubled in just the last three years. Gov. Cuomo recently passed the craft act which helps new and existing breweries cut through the government red tape.

"As a new business we've been growing, getting our beer into different markets,whether it be in New York city or Westchester County or throughout the island," Philbrick said.

Now Philbrick is trying to help the next batch of craft brewers by co-sponsoring a home brew contest.

Kevin Cain and Marc Jackson created the IPA that took him top honors at the Beerfield Festival in 2014. The win pushed them to start their own company "Lithology Brewing." Soon they hope to taste some of the profits of the growing craft beer industry which now makes up about 15 percent of all beer sales in the country.

"Smaller microbreweries there's kind of like a little brotherhood and everybody is looking to help each other out and go against the bigger breweries out there," Cain said.

Some experts worry the crowded craft market could cause the Brewers bubble to burst. But Philbrick said he's not concerned with little competition after all variety was the spice that helped the craft market grow in the first place.

"I'll go and drink the other breweries that are on the island because I like having the choice. I don't like to stick with one thing and I think you could say the same thing about most craft beer aficionado's so to speak," he said. "They want choices and they want something different which is why it works."

Which is why, much like a good pour, the best pattern for craft brewery growth must remain steady.