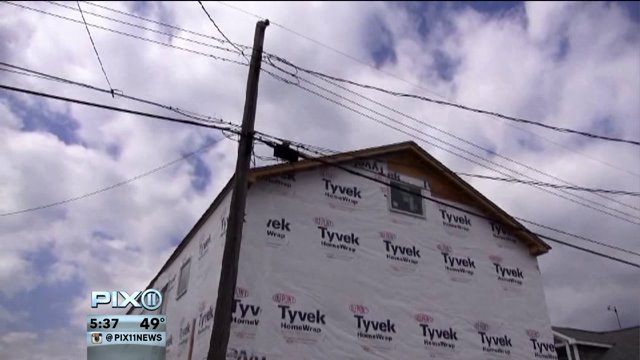 Some people raising their homes after Superstorm Sandy just got another bill in the mail.

TOMS RIVER, N.J. (PIX11) -- Some people raising their homes after Superstorm Sandy just got another bill in the mail.

This one from the utility company, Jersey Central Power & Light, charging them anywhere from $5,000 to $20,000 dollars to lift their utility poles higher. "$10,640 is my statement from JCP&L," said Kathy Gerndt, a Toms River homeowner. Gerdnt has already invested roughly $250,000 to rebuild and raise her home. With construction already underway, she found out she would have to pay to raise the utilities too.

Like thousands of other homeowners at the Jersey Shore, to rebuild, Gerndt had to raise her house above potential future flood levels, mandated by FEMA. A Jersey shore builder, Rich Roemmele, says he's heard of this happening all over the barrier island. He says a homeowner he's currently working with was able to get the utility's price down from $20,000 to $5,000 dollars.

Another homeowner who spoke to PIX11, but did not want to be interviewed on camera, said she paid $20,000 dollars to raise the utilities outside of her home. She said that JCP&L told them the high cost was mostly due to labor expenses. But homeowners say the bill is not itemized.

An email from JCP&L spokesman, Ron Morano, said Tuesday: "This is all about safety."  He stated there are requirements for proper clearances around wires carrying electricity and that customers are required to pay for the work involved in "relocation of its facilities."

JCP&L is encouraging customers to share their building plans with them to try and avoid it.

Toms River Mayor Thomas Kelaher is calling this "grossly unfair."  He said he wants the utility to prorate the cost. So if anyone else on the block decides to add a level or raise their home, the resident who originally paid the bill to raise the polls will get some money back. Town officials met with JCP&L to discuss this last week, but Kelaher says they have not heard back on the idea.

The Mayor also says that Toms River council plans to vote on a resolution as early as next week to express disapproval over the utility billing customers to raise the poles higher.