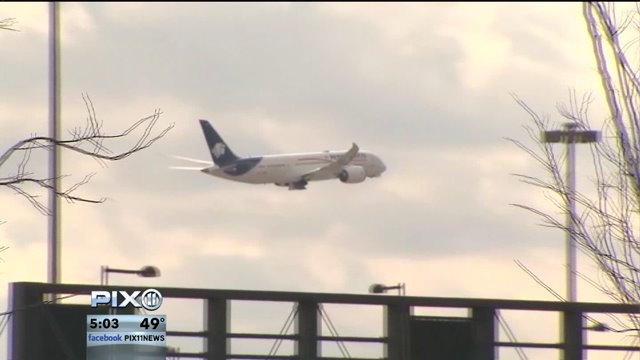 A passenger plane was forced to make an emergency landing at John F. Kennedy International Airport Tuesday after it struck a flock of geese shortly after take off, officials said.

NEW YORK (PIX11) -- U.S. Representative Joseph Crowley had more questions than answers during a call with PIX11 News on Tuesday.

It was all in reaction to a bird strike that forced American Airlines flight 1320 to return to JFK Airport with 133 on board.  No one on the Boeing 757 was injured.

"It's just another reminder of how serious the threat a bird strike poses to the aviation community and safety," said Rep. Crowley during the call. The Federal Aviation Administration confirmed to PIX 11 News that they are investigating the incident.

Bird strikes have been on the FAA's radar for years.  A report by the FAA and the U.S. Department of Agriculture from last September shows the dramatic increase of bird strikes involving commercial aircrafts since 1990, with a slight decrease reported in recent years.

Nonetheless, it is still posing a threat to aviation.  The most notable, the Miracle on the Hudson crash landing in January of 2009.

Aviation attorney Andrew "Duke" Maloney believes the problem will only intensify. "It is going to be an ongoing problem, I expect it is going to get worst before it gets better."

Maloney, a volunteer firefighter who marched in Tuesday's St. Patrick's Day Parade, shared with PIX11 News the complexities for pilots as a result of the bird populations at area airports. "It definitely adds to the risks and the dangers. There is not much a pilot can do particularly on take off and climb out when they are at maximum thrust and they have their hands full on the aircraft."

According to the FAA report, 71% of bird strikes occur between 0 to 500 feet.  However, experimental technology is trying to change that.  Last summer Rep. Crowley wrote FAA Administrator Michael Huerta a letter focused on the importance of avian radar systems and their ability  to assist air traffic controllers on wildlife that may pose a threat.

The system again is experimental and does not exist at any airport in the northeast, which has produced a lot of head-shaking and one key question; Why is not used at New York City airports?

Rep. Crowley quickly responded, "That is the question we've been asking the FAA to answer. We have not gotten the proper answer."