Teen says he was jumped inside McDonald’s at Brooklyn mall 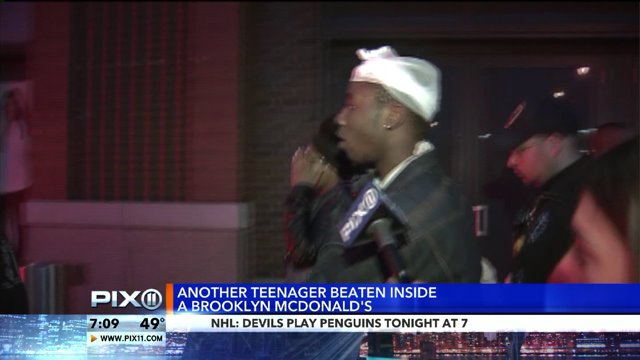 FORT GREENE, Brooklyn (PIX11) -- An alleged brawl went down in Brooklyn Monday night involving a teenage victim, marking the third such fight to come to light in recent weeks.

The teen told PIX11 News as he was being taken away to the hospital that half a dozen males jumped him while he was inside a McDonald's restaurant in Atlantic Terminal Mall.

"I only got an open gauge in my head and my arm is dislocated," the teen, who had no idea who his attackers were, said. "They were just looking through the window and started talking to me."

The teen is expected to survive his injuries. No arrests have been made in the case and police said they're investigating.

The latest incident comes days after a now-infamous beating of a 15-year-old girl by some six girls inside a McDonald's in Flatbush. Five of the six girls suspected of attacking the teen are now in custody. Video of the brutal beating quickly spread online, sparking outrage and a call for action to stop the violence.

Then another video surfaced of a brawl outside Action Burger on 292 Graham Ave. in Williamsburg. Video of that fight shows a young girl taking off her jacket and putting up her hair, then moments later she is surrounded by a group.

A passerby tried to help but the teens turned on him and he fled. The victim is shown lying unconscious on the floor.

"That is a real indication not only of the violence of young people but our real tolerance for violence now," said Brooklyn Borough President Eric Adams, who said he gets sick watching these videos of violence in his borough.