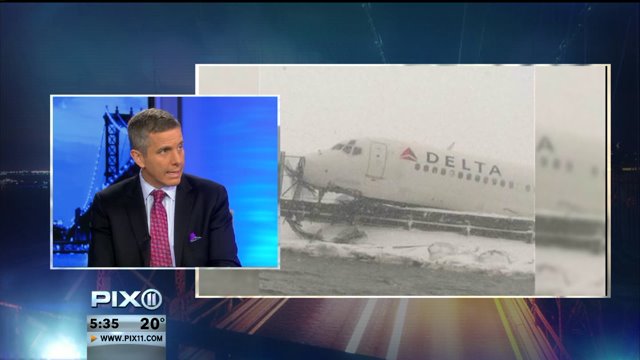 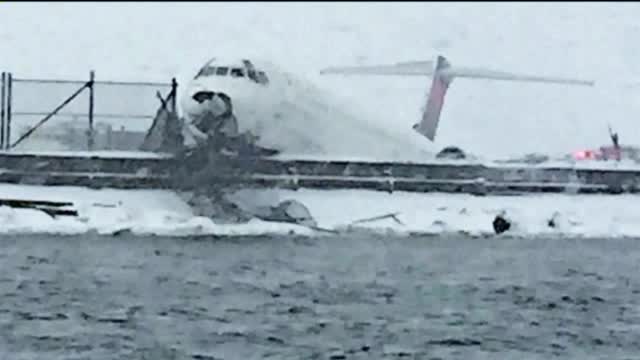 QUEENS (PIX11) -- Right now, members and staff of the National Transportation Safety Board are investigating what led to the crash landing of Delta Flight 1068 at Laguardia Airport, but comments from passengers, including New York Giants tight end Larry Donnell, are providing vital information and insight into what happened.

The closest images of the runway emergency came from first responders.  The Port Authority Police Department's aircraft rescue and firefighting team was first on scene after the crash landing just before 11:05 A.M. They were joined by the FDNY and NYPD, and all provided up-close photos of the wrecked plane.

Its flight deck, nose and front entry door were poised precariously over the waters of Flushing Bay, at the end of Runway 13, on which the plane, an MD-88, had attempted to land.  Seconds after its landing gear touched a tarmac on which heavy snow was falling, the plane skidded off the runway and into a safety barrier and fence, damaging both of its wings, and causing its nosecone to fall off.

Malcolm Duckett was seated over the left wing.  "I'm just thinking, 'What's going on?'" he told PIX11 News after being seen by medics and released from the Delta Air terminal.  "'Why is our wing hitting the fence?'  And I didn't know we were that close to the water."

"It was nerve-racking," said another passenger, who only gave her first name, Margaret.  But, she added, nobody panicked openly, "and the plane came to a stop."

"We landed, the plane started skiing," passenger Naquithae Taylor said.  What happened next he said, was that the plane went along the fence for "400 feet... and we all went forward [in our seats]."

The Port Authority, at a news conference Thursday afternoon, said that two other planes had landed just before Delta Flight 1086, and reported no problem braking on runway 13.  Port Authority spokesperson Pat Foye also said that the runway had been plowed shortly before Flight 1086 crash landed.

Those are questions that NTSB investigators will attempt to get answered.  They are expected to interview the pilot and the four other members of the crew shortly.  Meanwhile, the mood of the passengers can be best summed up by Larry Donnell, standout player for the Giants.

"I'm good," he told PIX11 as he walked out of the terminal and onto a waiting Port Authority bus.  "I'm just glad that everyone's all right."