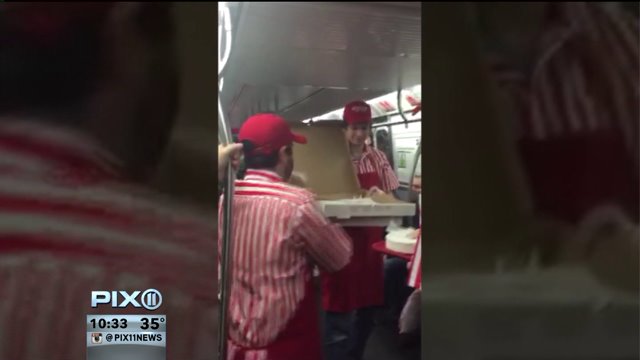 Straphangers aboard an uptown `E` train were treated to free pizza Tuesday.

In a video sent to PIX11 by Roxanne Robles, a group of men wearing uniforms from New York Pizza Suprema in Manhattan handed out slices of pizza to commuters. Robles says the group got on the train at Spring Street and claimed to be throwing a pizza party because the 'E' is the cleanest of all the MTA trains. There was cameramen and GoPros mounted on the poles in the car, Robles says.

She also added that "none of the New Yorkers" accepted the slices, however, "all of the tourists did."

The owner of the pizza told PIX11 that "Impov Everywhere" -- the same group that organizers the "No Pants Subway Ride" -- contacted him and asked if he would like to partake in the stunt. The group said they liked Pizza Suprema's pizza. The restaurant donated pizzas and uniforms for the event.

"Improv Everywhere did indeed stage a pizza-related project on the subway today. The full story will be shared on our YouTube channel in an upcoming video," the group told PIX11.

"We prefer customers not eat aboard trains but hey, it's free pizza," a spokesperson for the MTA told PIX11 in a statement. "We will assume those pizza boxes and plates found their way to trash receptacles."

In 2014, the 'E' train was rated the 3rd best subway line in a report done by transit advocacy group NYPIRG’s Straphangers Campaign. The 'C,' 'J,' and 'Z' trains were rated the cleanest.