From Wall Street to moms, business of marijuana attracting diverse set of entrepreneurs 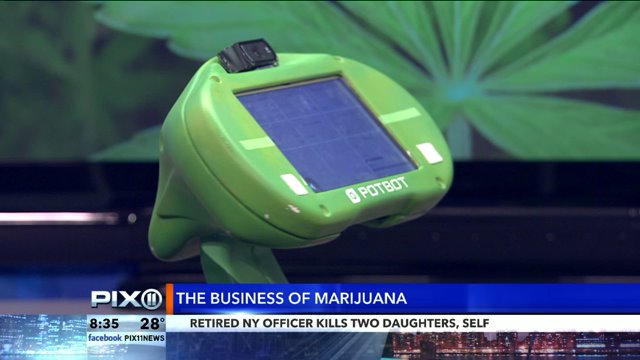 PIX11`s Kirstin Cole takes a look at `pot bot,` a machine that dispenses information about medical marijuana doses if patients have a prescription.

SYOSETT, Long Island (PIX11)-- Rachel Jones, 24, is a stay-at-home mother from Syosset, Long Island who quit her six-figure job and started her own business hoping to ride the marijuana wave.

"I see myself as an entrepreneur," Jones said.

However, the one key ingredient missing is marijuana.

This new mom currently markets tobacco use only to those over 19, but she's poised to blow her business, partnering with marijuana growers and dispensaries, anticipating recreational pot will soon be sold in New York and across the U.S.

"In a few years this could be a factory and I could be hiring other stay-at-home mothers," Jones said.

From one woman entrepreneurs to well-funded multi-million dollar businesses, marijuana is no longer just a pipe dream. From growers to CEO's, this business, estimated to be at $46 billion by 2016, is expected to grow 700 percent over the next five years.

Michael James left a Wall Street career to be the CFO of Terra Tech, which owns this 10 acre organic greenhouse in Belvedere, N.J. and has cannabis licenses, labs and facilities from California to Nevada to Florida and more.

"Most profitable herb you could be selling?" James said. "Cannabis."

His business at Terra Tech is currently valued at 60 million dollars is betting the farm on marijuana.

"You look in here across this fragrant field of basil and you see three plants of marijuana," Jones said. "And that's a whole greenhouse of green."

Growing edible herbs, this highly automated hothouse is poised to convert to a pot house in 48 hours if the company can win a grow license in New Jersey. They're also applying for a license in New York State, where Gov. Cuomo just made medical marijuana legal this past July.

James thinks their big business model a winner over smaller dispensaries that have already failed in the Garden State.

Bethanny Frankel of Real Housewives fame, plans to use her Skinny girl cocktail fame to launch a Skinny Girl marijuana-- guaranteed not to give you munchies. Even Wall Street wants in.

"We've seen overall industry do 15 to 45 billion dollars," Jones said. "We'd like to have as big a market share as we can."

Leslie Bocksor started a hedge fund company dedicated to pot. He expects it will soon cap out and he'll need to open another and says business opportunities are mind-blowing.

"They are incredibly excited to be investing in it," Bocksor said. "We haven't seen an opportunity like this that even compares since the birth of the internet back to the mind to late 90's."

"People are spending money on cannabis--hundreds of millions of dollars," Bocksor said. "They're probably spending three times as much as that on flight, on rental cars, on hotels and restaurants and on shopping. The economic impact is extraordinary."

And all those businesses need workers.

Weed Hire currently lists about 1,200 jobs from 800 companies, everything from hourly workers to tend plants to senior state jobs in the six figures. Berstein says he and his partner saw a need in this booming business for workers, but also for privacy job seekers.

"If you were to go on LinkedIn in connecting with people from Fortune 500 companies to a marijuana company you could jeopardize your career," Berstein, co-founder of Weed Hire said. "Weed Hire is that completely separate place where people who are interested in the industry can find real job opportunities."