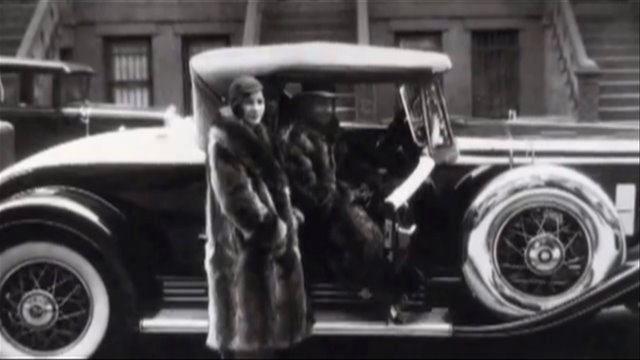 HARLEM (PIX11) -- Some of the images it analyzes are so disturbing and so jarring that at times it's difficult to watch the documentary "Through A Lens Darkly."  But at the same time it's almost impossible to turn away because all of the images in the film -- some very disturbing, but many uplifting -- are so compelling and provocative.

"The film very much became a war of images," said filmmaker Thomas Allen Harris in an interview with PIX11 News, "between images that were taken by black photographers, commissioned by black families, and the images that were stereotypes that depicted African Americans as less than human, and not citizens."

Harris is a native New Yorker who also spent many years of his childhood in Tanzania, in southeastern Africa.  He told PIX11 News that his own diverse background, as well as those of the many photographers, artists, archivists and historians who are shown in the film and collaborated on it, create a broad palette of experiences that are brought together in "Through A Lens Darkly."

"It comes from the Bible, Corinthians," said Harris, regarding the title.  Specifically, it's a reference to I Corinthians 13:12, which reads, in the Lamsa Translation of the Bible, "For now we see through a mirror, darkly; but then face to face."

"[It asks] how do you see God?" Harris explained.  "You can't see God.  What you can see is a reflection.  For me, true art is always a kind of a reflection of the divine in us."

Reflections in Black happens to be the name of a best selling book by MacArthur genius grant winner and artist Deborah Willis, who is a close friend and colleague of Harris's.

"Deborah Willis approached me," he said, "about making a film about her book."  That was in 2003.  The filmmaker spent the next ten years making "Through A Lens Darkly."  "It took a herculean effort to make this film," he told PIX11 News.

The book contains both shocking and stunning images of African Americans, taken professionally over a century and a half.  Harris built on that concept for his film.

"We had to find images that were in pop culture," he said, "like the blackface images, and the lynching images.  It took a long time."

Over the decade in which the film came together, Thomas Allen Harris also worked on another project, which intentionally ended up becoming part of the documentary.

"We wanted to do this online project called the Digital Family Reunion, where we would help people celebrate the importance of their own family photographs," he said.

"I started marketing that prototype around and people started saying, 'We want you to do a roadshow, a live event.'  And all of a sudden, the Digital Diaspora Roadshow was born.

"It was through the roadshow that we collected in excess at that time 6,000 images.  Most of them were African American, because we were targeting that population, but Jewish Americans came in with all their images, we had Latinos, Asians, people wanting to come in and share their photos and stories in front of a live public audience."

The roadshow went to numerous cities nationwide, and its spirit of publicly sharing very personal historical images became a major part of "Through A Lens Darkly."

"My film," said Harris, "is kind of an ode to the family album."

That tribute, along with the stories of African American photographers who record images ranging from family photos to high artistic works, Harris uses to help viewers do what he's done over time: better understand themselves.

"This is who I am and I have to embrace myself," he said in the interview in his production office.  "I have to have compassion for myself and I have to know myself."

Harris also pointed out that recent news stories about tragic deaths of African Americans, such as Eric Garner, Michael Brown and Trayvon Martin, have added to the library of piercing, disturbing images of people of color.

"That's a tension that we live with," he said.  "That's why in 1968, Ernest Withers took the now famous picture of the garbage men's strike, with these African American men holding these posters saying 'I am a man,' or jump 50 years and have to hold a poster saying 'Black lives matter.'"

Recent protests over those tragic deaths have brought very ethnically diverse people together.  Harris believes that his film will, as well.

"It's a universal story," he said.  "It was actually me taking the film to the [2014] Berlin Film Festival that led to the theatric realease in the United States."

Now, "Through a Lens Darkly" has been shown in theaters in 60 cities worldwide.  For the first time, though, this month it's been shown on television here in the U.S.

"What's going to be happening in people's living rooms," Harris said about the way his film is viewed and responses to it.  "With conversations between different generations and different people.

"I want people when they see this film," he added, "to go home and think about their own family images, regardless of their ethnicity, and think about how it connects to the public record, so they will see the importance of the family album."

The full documentary can also be streamed online free of charge here http://video.pbs.org/video/2365421891/