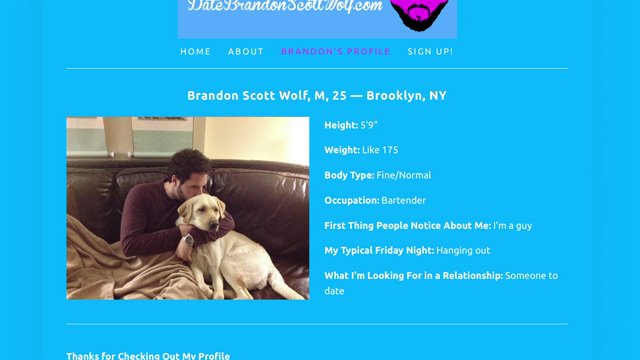 If you`ve seen one of them, you`ve seen them all -- those dating site ads promising to find you love.

NEW YORK (PIX11) -- If you’ve seen one of them, you’ve seen them all -- those dating site ads promising to find you love.

However if you’re 25-year-old Brandon Scott Wolf, you take matters into your own hands. The Brooklyn-based comedian recently created and launched a dating website so single women can date him. Only him.

If it sounds too funny to be true, that’s why it is – sort of. The comic who also works as a bartender in New York City, initially produced the site as a gag but in a matter of days it has catapulted him to viral status.  “A couple of my friends have messaged me and their entire thought process is like ‘Oh it’s funny that you’re doing this but also if you get famous – it’s because you’re lonely,’” Wolf told PIX11 News.

While getting laughs was the immediate goal, finding love for the single man is a real thing. Nearly a hundred applicants have signed up to date Wolf and he’s already gone out with one of them.

Learn more about his quest to find love by visiting his site, http://www.datebrandonscottwolf.com/.