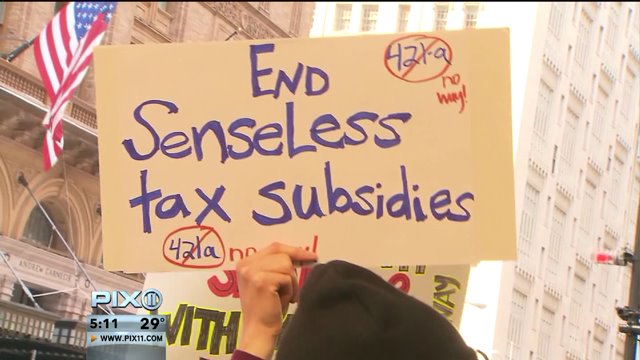 MIDTOWN (PIX11) -- Some of the highest priced buildings in New York reap tax benefits paid for by middle-class workers. That's one reason some of those workers took to the streets on Wednesday. Another was anger by union construction workers over a major developer choosing to not use organized labor to build the country's tallest residential building.

It's 111 West 57th Street, between 6th and 7th Avenue. In front of its construction site at noon Wednesday, a couple hundred construction workers gathered for a rally against the building's developer, JDS Development Corporation. It has stated publicly that it does not intend to build its iconic structure with union labor.

At the rally, workers said that while they felt buoyed by a recent statement by the city's public advocate calling for JDS to use union pay scales in order to compensate workers for the project, they were still angry that it was not binding, and that such a high profile project was able to proceed without using organized labor.

Some of the speakers used harsh language to describe the situation. "They're gonna suck the blood out of you first, and then everybody else who walks by," said one protest leader. JDS has not yet responded to a request for comment.

Meanwhile, just four doors down from the construction workers' protest, was another demonstration. It was made up of affordable housing advocates and of families. "421-a has got to go!" they shouted.

Specifically, they were protesting against the New York State 421-a tax abatement. It's a program established more than four decades ago to help develop abandoned city lots and to keep landlords and developers at that time from leaving New York City.

On Wednesday, the protesters were in front of the super-luxe skyscraper One57, located, as its name implies, at 157 West 57th Street. It received a 421-a tax abatement, allowing people buying into the condominium to forgo paying taxes on their multi-million dollar properties for years.

Protesters noted that the penthouse in the luxury tower sold for $100 million, a sure sign that its occupant could afford the taxes on the property. Instead, taxpayers pay up to $1.1 billion per year to cover 421-a abatements. It's a fact that had protesters irate.

"They're taking our subsidized money," said Letitia Harper, a Bronx resident. "A lot of people need housing... too many people are in [the] shelter."

Lauren George, the director of the grass roots organization Common Cause, said that her organization wants to see the 421-a abatement ended altogether. Instead, she said it should be replaced with a program where "developers have to apply... and show what they're going to do with that money."

Deputy Manhattan Borough President Aldrin Bonilla was at the protest as well. He said that he and Gale Brewer, the borough president, favored radical reform of the 421-a program. They want developers to have to prove they were using the tax break as a way to develop otherwise undesirable properties.

"The 421-a program," said Bonilla, "was created in 1971, when developers burned their properties to get insurance money. We've come a long way since 1971."

The 421-a program will be up for review in Albany in June. At that time, the state legislature has to choose if it will renew the program as it is, revise it, or scrap it altogether.