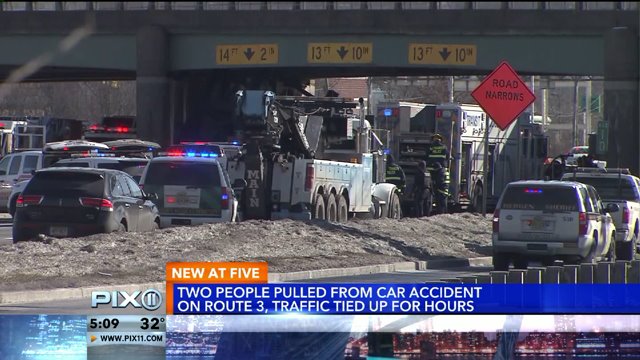 Two people were pinned inside a delivery van after a tractor-trailer too tall to fit under the 13-foot-10-inch Paterson Plank Road overpass slammed into the structure.

The tractor-trailer was transporting a large, steel structure -- possibly a crane -- when it hit the bridge, toppling it's load down onto the van, according to Secaucus Mayor Michael Gonnelli.

Emergency workers managed to extricate van's occupants, both of whom suffered injuries.  The first was conscious the entire time and was taken by ambulance to an area hospital.  Roughly an hour later they managed to free the second man who suffered serious leg injuries.  He was airlifted to a Hackensack-area hospital.

The driver of the tractor-trailer isn't believed to be physically injured, but was shaken up and taken to Meadowlands Hospital for treatment. He somehow managed to make it under several similar overpasses before he crashed, according to Gonnelli.

The tractor-trailer did substantial damage to the Paterson Plank overpass, and DOT engineers are now on the scene trying to determine if it is safe to reopen the road.

Traffic along Route 3 is moving at a crawl as the police investigation continues, with cars being diverted in both directions to service roads.  Officials believe Route 3 will be closed for several hours and expect major delays during the evening commute.

This is a developing story; refresh for updates.