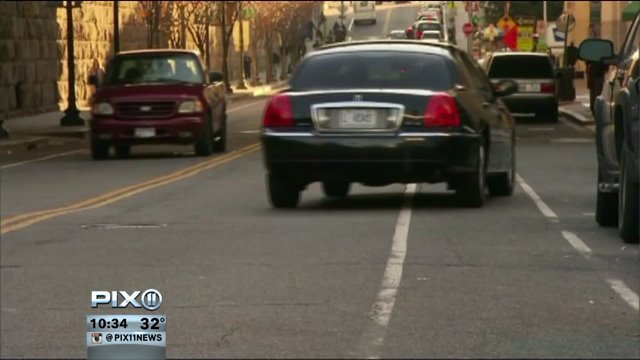 New Jersey lawmakers will be discussing a bill Monday morning that would increase insurance limits for ride sharing services, like Uber and Lyft.

NEW JERSEY (PIX11)-- New Jersey lawmakers will be discussing a bill Monday morning that would increase insurance limits for ride sharing services, like Uber and Lyft. An Uber spokesman says company representatives do plan to testify before the state senate transportation committee tomorrow.

The bill would require ride sharing companies to provide $1.5 million dollars in liability insurance coverage, in case of an accident. Both Uber and Lyft currently carry $1 million dollar policies.

The bill would also mean mandatory criminal background checks for drivers, as well as driver history checks and drug tests. Uber and Lyft both currently say they background check their drivers' criminal and driving history.

"There are already 22 different jurisdictions that have established permanent ride-sharing regulations," said Uber spokesman Matt Wing in a statement on Sunday.

"We are continuing to work productively with state legislatures to advance bills that give riders better transportation choices and drivers greater economic opportunity," said Wing.

In favor of increased safety regulations were Uber drivers and yellow cab drivers, who spoke to PIX11 on Sunday.

"I don't mind the competition, but it has to be a fair competition," said yellow cab driver Felix Guzman.

Uber drivers say the company keeps 20% of their fares, in part, to pay for insurance to cover drivers and passengers.

The bill up for discussion on Monday also lays out rules that would require ride sharing companies to be permitted by the state. Among other requirements, the companies would have to keep at least two years-worth of records on the locations where Uber drivers are picking up and dropping off passengers, what times they are doing it at, and the mileage they travel.