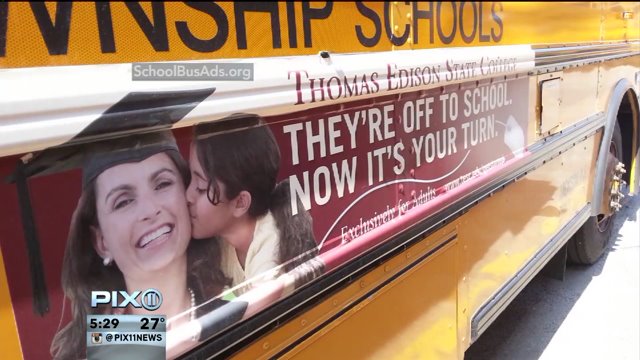 Sayreville Public Schools is the latest district in New Jersey to consider putting ads on their school buses.

NEW JERSEY (PIX11) -- School buses can carry more than just your kids these days. They're also giving rides to advertisers. Sayreville Public Schools is the latest district in New Jersey to consider putting ads on their school buses. At least 18 districts in the state are already said to be doing it.

Most are in south Jersey. But now, it's catching on further north. Clifton, West Milford and Wayne are all working with SchoolBusAds.org to generate a profit from their buses.

Some districts have reportedly estimated their profits to be as much as $350,000. SchoolBusAds.org estimates profits of $400-$500 per bus, per year. The non-profit organization has been designated to help districts get their school bus ad business up and running.

When Sayreville parents were told Monday about the idea, they were either indifferent or supportive.

"We need more teachers," said Nana Boateng, a mother to a second-grade elementary student in the district.

"We need protection for the children too. I mean like police, you know. Security is very, very important," she said.

There are rules on how school districts can spend the extra money. Districts must use half of the advertising revenue to offset fuel costs. The other half must be spent to support school programs.

And of course, not just any ad can be put on a school bus carrying children. Anything obscene is prohibited. Ads that promote liquor, tobacco or gambling are also not allowed. And political or religious ads cannot be put on school buses.

Sayreville's superintendent also tells PIX11 the district is considering putting ads on their website and sports field signs. He says the district has to budget for inflation and increased costs for health benefits and salaries, all while abiding with New Jersey's two-percent property tax cap.

Other ideas for generating revenue in the district include renting out the use of school facilities, running tuition-based programs and applying for more grants.

School bus advertising has been allowed in New Jersey since May of 2012, which is when the State Board of Education approved it. A law passed in New Jersey that would allow for it in 2011.