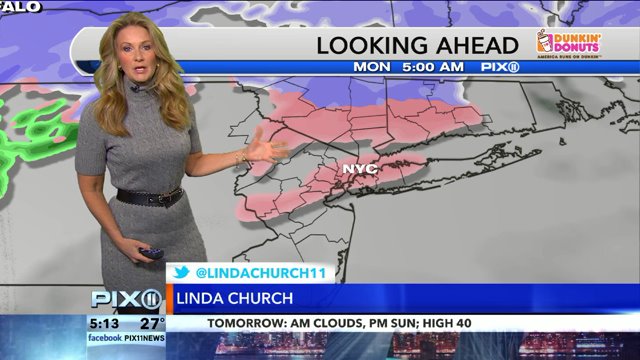 NEW YORK (PIX11) -- Slick roads and icy sidewalks will be a dangerous reality Monday as a messy winter storm covers the region in a layer of ice topped by snow, the third time in a row that the work week has started with a treacherous commute.

Freezing rain will cause the most issues, with precipitation starting before 6 a.m. in most areas in New York, New Jersey and Connecticut.

The storm does not look like it will be significant in terms of precipitation, but a coating of ice covered by at least an inch of snow will combine to make for dangerous conditions, especially during the morning commute.

When the storm finally passes midday Tuesday, less than a tenth of an inch of ice likely will have coated the ground.

Ice will be the predominant precipitation in the city until noon, when it switches to light snow. Between 1 and 2 inches of snow is expected in the New York City metro area and on Long Island.

Snow and ice for the next 24 hours. Clears tomorrow morning. @PIX11News pic.twitter.com/o9TwkmfSgr

The most significant accumulation is expected north of I-84, including the Litchfield Hills, Connecticut and Berkshires, over to the New England coast.

For central and southern New Jersey, liquid precipitation is expected for a longer period of time but it still could change to sleet then freezing rain for a few hours and even end as snow, but accumulations would be lower.

A winter weather advisory is in effect until 6 a.m. Tuesday for New York City and Long Island, coastal Connecticut, Rockland and Westchester counties, and portions of northeastern New Jersey because of freezing rain, snow and sleet, according to the National Weather Service.

Hundreds of flights into and out of New York-area airports -- John F. Kennedy International, Newark International and La Guardia -- have been cancelled or delayed for hours, according to FlightAware's online flight tracker.

The storm will move away Monday night. Tuesday and Wednesday will be quiet with temperatures slightly below normal in the low to mid 30s.