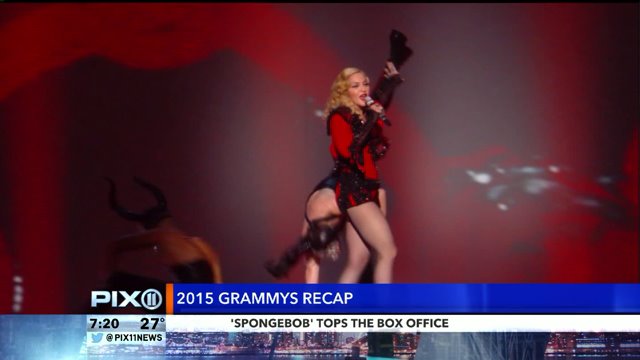 NEW YORK - It's almost a rite of passage for award-winning artists not named Beyonce to take shots from Kanye West at award ceremonies, but Monday, Beck -- Kanye's latest victim -- is apparently taking it all in stride after his big win at the 2015 Grammy Awards.

When Beck, 44, won Album of the Year for "Morning Phase," the 37-year-old rapper mimicked his 2009 interruption of Taylor Swift by running on stage and pretending to grab the microphone before walking off the stage smiling.

"If they want real artists to come back, they need to stop playing with us" -- Kanye West

Kanye appeared to be having fun, unlike during the Video Music Awards when he took the microphone from Swift during her acceptance speech for Female Video of the Year and said, "Yo Taylor, I'm really happy for you, and Imma let you finish, but Beyoncé had one of the best videos of all time."

During an E! interview after the award, however, West seemed completely serious about interrupting Beck's acceptance speech.  "I don't know what he (Beck) said, I just know if the Grammys, if they want real artists to come back, they need to stop playing with us," Kanye said.  "Flawless, (speaking about) Beyoncé video, and Beck needs to respect artistry and he should have given his award to Beyoncé."  He also accused the Grammy Awards of "diminishing art," "not respecting the craft" and "smacking people in the face after they deliver monumental feats of music."

Beck's "Morning Phase" was released to widespread critical acclaim, nominated in five categories at the Grammys and also won Best Rock Album of the year. Despite Kanye apparently excluding Beck from the "real artists," the rocker had no ill will for West, telling US Weekly, "I was so excited he was coming up!  He deserves to be on that stage . . . You can't please everybody.  I still love him and think he's genius."

"The Grammys, if they want real artists to come back, they need to stop playing with us. We ain't gonna play with them no more. Flawless, Beyoncé video, and Beck needs to respect artistry and he should have given his award to Beyoncé.

And at this point, we tired of it because what happens is, when you keep on diminishing art, and not respecting the craft, and smacking people in the face after they deliver monumental feats of music, you're disrespectful to inspiration. And we as musicians have to inspire people who go to work every day and they listen to that Beyoncé album, they feel like it takes them to another place, then they do this whole promotional event that, they'll run the music over somebody's speech, the artist, because they wanted commercial advertising.

And by the way, I got my wife, I got my daughter, and I got my clothing line, so I'm not gonna do nothing to put my daughter at risk, but I am here to fight for creativity. That's the reason I didn't say anything tonight. But y'all know what it meant when 'Ye walks on that stage."

Wife Kim Kardashian West stood by his side wearing what appeared to be a slightly painful smile as her husband laid into the awards, at one point even tearing the E! logo off his microphone.  She appeared to follow Kanye's lead later, however, posting an Instagram photo with the caption, "This is the Beck won that award face?!?!?!"

THIS IS GOLD. Jay was straight up horrified when Kanye got up on stage! https://t.co/umrtcl9W4p

You're right, Kanye. No one ever gives Beyoncè recognition. It's not like she has awards, platinum albums and sold out shows or anything.

Hey Kanye, how much does Beyonce need before you think shes getting a fair shake out there? Just curious.