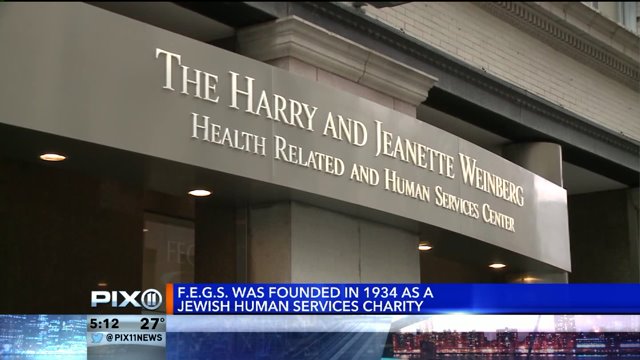 GREENWICH VILLAGE (PIX11) -- It helps more than 100,000 of the neediest New Yorkers find jobs, affordable housing and other services, but now those clients of the Federation for Employment and Guidance Services, or FEGS, are left wondering what will happen to their programs.

Meanwhile, FEGS tries to explain how, after eight decades of bringing state, federal and private money together to help some of New York's less fortunate, it has to shut down, with a gaping budget hole.

Outside of the charity's headquarters on Hudson Street, a few dozen of the hearing- and speech-impaired people it helps were walking out of the building when they learned from PIX11 News that FEGS was planning to close its operations over the next three months.

One woman made a sign of tears with her fingers on her face, cascading down from her eyes. The people she was with also signed their reactions, which a FEGS employee translated.

The group of clients was among the disabled, un- or underemployed, homeless, or sick New Yorkers who rely on FEGS.

"I was definitely surprised," said Michael Samuels, a participant in a FEGS job finding program. He said he was "worried, trying to figure out where we're going to go, what we're going to do."

FEGS has not formally told its clients that it's closing. In fact, most of the people who walked in and out its headquarters on Monday learned from PIX11 News about the closing that's expected to be completed by early spring.

The charity said in a statement that it "has concluded that its clients are best served by the transfer over the next several months of all of FEGS’ programs and services to other providers. FEGS is now working closely with its City and State government partners, and other stakeholders, to effect those transitions."

FEGS's budget of over $220 million is made up largely of state and federal funds. The organization's accounting firm realized in its most recent audit that the charity was $19.4 million dollars short in its operating budget.

What is known is that the average salary among CEOs for human services charities like FEGS is $110,100, according to non-profit organization watchdog CharityNavigator.com. The last FEGS CEO to serve a full term, Gail Magaliff, made about six times that, according to IRS tax documents, more than $620,000 in salary and other compensation. She resigned suddenly, in November 2014.

Also, the recommended administration costs for a charity like FEGS is 25 percent or less of its budget. FEGS spends 30.

Its spokesperson said in a statement, "The $19.4 million deficit that FEGS reported in Fiscal Year 2014 was a result of multiple factors, including poor financial performance on certain contracts, contracts that did not cover their full costs, investments in unsuccessful mission-related ventures, write-offs of accrued program revenue, and costs
resulting from excess real estate."

The charity that houses thousands of needy people admits that it also is paying for space it doesn't need.

However, at Tanya Tower, a high rise building in Alphabet City run by FEGS, there's no shortage of people in need of the help the charity provides.

Douglass Braswell, who is speech impaired, has been a Tanya Towers resident for 35 years. "Good place," he wrote on a pad of paper he carries with him for the benefit of people unable to sign.

When PIX11 informed him that some programs from which he's benefited over the years may be cut due to FEGS's budget hole, Braswell wrote something else on his pad. "I hope not," he wrote.