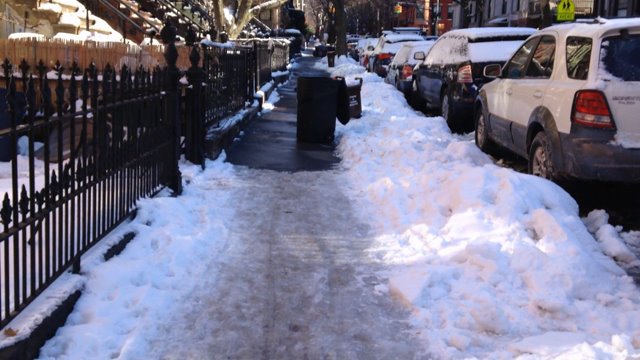 Snow won`t keep a mail carrier from doing their job, but just like the rest of us, having the snow on the ground makes getting around a little harder.

PARK SLOPE, Brooklyn (PIX11) -- Snow won't keep a mail carrier from doing their job, but just like the rest of us, having the snow on the ground makes getting around a little harder.

So, Dalia Sierra took it slow and steady as she shuffled over the snow to get to her doctors appointment in Park Slope Tuesday.

"I feel afraid, not only for me but for my grandchildren and all the people around because it's not easy. The patch of snow and you don't see no salt on the floor," said Sierra.

Which is why the city requires homeowners and businesses to clear snow from the sidewalks no more than 4 hours after snowfall stops.

If it's still not shoveled they could face fines ranging from $100 to $350 for the offense.

"Four hours sometimes is not enough, but by 11 the next day, it should be gone, yeah," said Carlos Ceville.

If the snow has become too icy to shovel, as it has in many places because of the frigid temperatures, the city does allow you to spread either salt, saw dust, or sand to improve safety for pedestrians. But most people say if the sidewalk isn't shoveled, homeowners rarely do anything.

Ceville says, most people in Park Slope shovel, but he finds himself trudging across the same snowy sections year after year.

"People complain, sometimes it gets done, but I don't know how often. Usually it's always like this for a while before somebody comes in and really does anything about it," said Ceville.

Last Year the Department of Sanitation handed out more than 2,000 citations for un-shoveled sidewalks in January alone.
A spokesperson for the Department told us they don't have statistics for this year just yet.

If you have a problem spot in your neighborhood, you can file a complaint with 311.

In the meantime, you'll just have to watch your step.