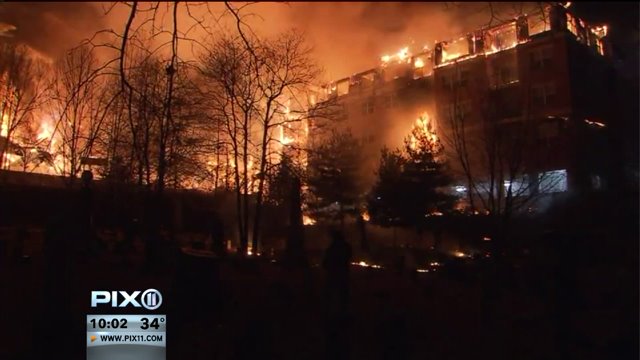 EDGEWATER, NJ (PIX11) -- Workers at an apartment complex in New Jersey called their supervisor instead of 911 when what would become a devastating fire broke out, a mistake that delayed emergency responders' arrival, the chief of the Edgewater Fire Department said.

Police said the blaze at The Avalon at Edgewater apartment complex was sparked by plumbers. Investigators believe the fire was "totally accidental."

But there's concern surrounding the fact that those workers allegedly called their supervisor as the flames began to grow at 4:30 p.m. Wednesday instead of calling for firefighters.

The fire soon became out of control and ultimately gutted 240 apartment units, permanently displaced some 500 residents. Another 500 or so residents in 168 nearby apartments are temporarily displaced while the cleanup continues.

Crews were still on the scene Friday morning putting out hot spots. The biggest obstacle to controlling the blaze was the building itself, made of lightweight wood construction.

"You have a lot of open voids, open spaces, fire spreading quickly through the walls and floors, leading to collapses. In fact, a complex built here by the same company of the same materials burnt to the ground in 2000, while still under construction," Fire Chief Thomas Jacobson said.

The chief added that the inexpensive material, which is now commonly used in new construction, is up to code in New Jersey.

New Jersey Governor Chris Christie was in Edgewater Thursday night, offering state aide to local officials and promising support to hundreds of families left homeless. A local state of emergency had been declared and schools were closed again on Friday, the town's mayor said.

Displaced families were touched by the governor's visit and by an outpouring of support from their  community. Countless donors have offered to supply food, clothing and toys to the families, many of which have children, who are reeling from losing their homes.