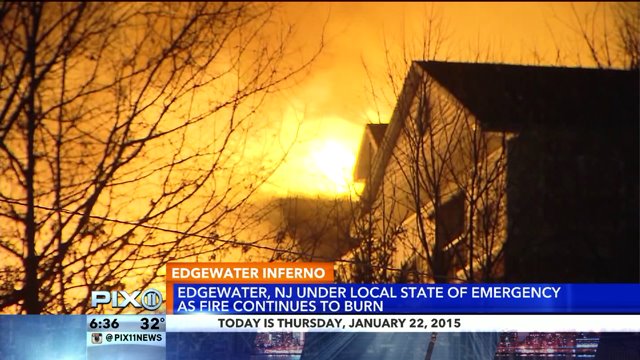 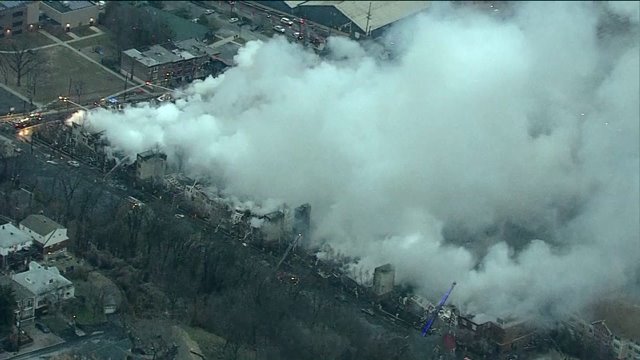 EDGEWATER, N.J. (PIX11) — After a “long and challenging night,” a stubborn blaze that destroyed hundreds of homes in a New Jersey apartment complex is under control but still smoldering, the mayor of Edgewater said Thursday.

Though some pets were rescued, “several” are believed to have perished in the blaze, McPartland said.

Massive plumes of white smoke still could be seen Thursday billowing from the charred remains of The Avalon at Edgewater, located across the Hudson River from New York City.

Flames  broke out about 4:30 p.m. Wednesday and quickly spread to engulf the luxury complex made of so-called lightweight construction. More than 15 hours later, the blaze was contained but not fully extinguished.

The same location caught fire in 2000 while under construction.

The blaze prompted a massive emergency response, with 250 firefighters from 35 towns descending on the area. Two FDNY fire boats, two Jersey City marine units and one New Jersey State Police boat were stationed on the coast, pulling in water from the Hudson River to douse the flames.

Some 240 apartment units  at The Avalon were destroyed and 168 nearby units were saved, the mayor said.

“With a fire of this scope, to have no loss of life and so many people displaced, we actually feel fortunate and thankful” for all the units that responded to help,” McPartland said at an earlier news conference.

“They were down but they weren’t out,” McPartland said of the evacuees he visited at the Edgewater Community Center.

Much of the complex has collapsed, said Chief Thomas Jacobson, with the Edgewater Fire Department said. The next task is to extinguish any flames that likely are still burning under the rubble.

Sprinklers inside The Avalon were working Wednesday night when the fire erupted, Jacobson said. But by the time his crews arrived, flames had infiltrated the floors and ceilings.

"The hallways were banked floor to ceiling with smoke," Jacobson said.

Three people had to be rescued by firefighters who were forced to crawl beneath the smoke to navigate the dangerous situation.

"Our men did a hell of a job. Our mutual aid did a great job," Jacobson said.

Schools in Edgewater are closed Thursday and a local state of emergency is still in effect, the mayor said.

More than 14 years ago, a fire started at the same location where a five-story condominium complex was under construction and destroyed nine homes and damaged several others. The Aug. 30, 2000, blaze forced the evacuation of dozens of nearby residents, including patients at a nearby nursing home. The cause was never determined, although investigators ruled out arson.