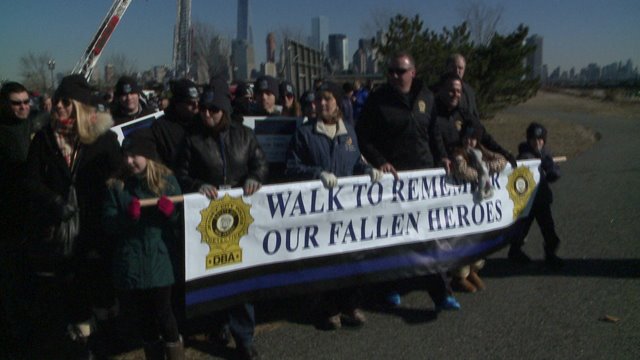 Hundreds gathered in Jersey City to honor officers killed in the line of duty in 2014.

JERSEY CITY, N.J. (PIX11) -- Hundreds, including Senator Robert Menendez and Lt. Governor Kim Guadagno, gathered at Liberty State Park in Jersey City on Saturday, where an 118-second moment of silence was observed for the 118 members of law enforcement across the country who died in the line of duty in 2014.

One of last year’s four fallen New Jersey officers honored was Jersey City Police Officer Melvin Santiago.  The 23-year-old, on the job only 7 months, was shot to death in July while responding with his partner to a call of an armed robbery at a Walgreens.

“He wanted to make a difference,” said Officer Santiago’s mother Cathy McBride.  “He did not anticipate going to work that day, and 4 hours later (he was) murdered, slaughtered, ambushed.  This has got to stop. These men and women are protecting us.  You don’t have to like a cop.  But you need to respect what they’re doing.”

“I’m happy that we’re here to support the officers that have sacrificed, and support the ones that are still here carrying the torch,“ said Ronnie Gonzales Ramos, cousin of Officer Ramos.

The money raised from the walk will go into the union’s Fallen Officers Fund and help provide for the future of Officer Santiago’s 13-year-old brother.