It’s cold in the tri-state area, but the almanac points out it could be much worse 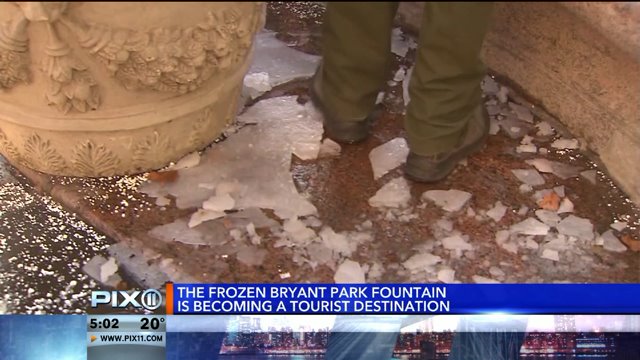 However, when this week's bone chilling temperatures are compared to past winters, the current deep freeze may be warmer than one might think. Despite that fact, though, Thursday's frigidity was hard to handle, by virtually any assessment.

The day began with a hot fire in the bitter cold in Jersey City. Firefighters there had to find hydrants that weren't frozen over in order to put out the blaze on Washburn Street that left four people homeless. The JCFD got the fire out, but it was a tough task.

"Your feet and hands are freezing," Chief Darren Rivers told PIX11 News, "and even when you get wet, your gear is frozen and it's difficult to move around."

He'd have been helped if he could have had water from the fountain outside of the Capital Grille restaurant on 42nd Street, near Grand Central Terminal. It's heated to around normal room temperature, and steady plumes of steam rising from it are clear evidence of that.

Contrast it with the Bryant Park fountain. It had four foot long cascades of ice all around it, and covering the surface of its surrounding basin and the sidewalk surrounding that.

But the nearly-frozen, but still flowing, fountain has heated pipes. So says one of the maintenance workers at the fountain, Evanston Crichlow.

He spoke with PIX11 News while he was carrying out a major duty of his job this time of year: he was breaking up the ice on the sidewalk and other flat surfaces surrounding the fountain that are used by pedestrians.

He's outside most of the day, hard at work. He said he has a simple procedure for staying warm while working outdoors. "I come and do some [work, then] go back in and warm up, come back out."

A look upward at just about anywhere in the city reveals a picture similar to that on the Brooklyn waterfront near the Brooklyn Bridge Thursday afternoon. There, on the floors of a high rise being built next to Brooklyn Bridge Park were construction workers, standing on the edge of unenclosed floors high in the air. A stiff wind blew through their elevated construction site, making the 18 degree high temperature feel more like two or three degrees Fahrenheit up on their perch.

Construction worker Bob Sarro explained how he keeps from freezing. "Just keep moving around," he told PIX11 News. "Run up and down the stairs a couple of times. That'll keep you warm." He added that he was wearing "four or five" layers of clothes.

Without that kind of protection from the chilly wind, it was a miserable, and even life threatening day. The National Weather Service issued a wind chill advisory Thursday morning, which was the same time that Shakira Sanchez was stuck waiting on an elevated platform at Queensboro Plaza for a train that was delayed by the challenging weather.

NJTransit cross honored train, light rail and bus tickets in an effort to keep people on some mode of transportation instead of out in the cold during weather related delays. At least one commuter was skeptical of the decision.

"That's kind of ridiculous, NJTransit," said Rachel Hannur, as she waited for a train back to New Jersey from Penn Station. "It's not snowing or anything. Just because it's cold, come on. It's New York-New Jersey. It's not Alaska."

Actually, on Thursday, a lot of Alaska was warmer than the tri-state area. The mercury hit 25 degrees in Anchorage, a full six degrees higher than in New York. Helsinki, the capital of Finland, which extends above the Arctic Circle, was above freezing. Its high was 35 degrees. Denver, in the heart of the Rocky Mountains, was balmy in comparison to the Big Apple, with a high of 45 on Thursday.

An expert on the history of weather patterns in our region acknowledged that it was frigid, but said that when Thursday's deep freeze is put in perspective, the current winter season is not so bad.

"Last year was one of our harshest winters in recent memory," said Rob Frydlewicz, who runs the New York City Weather Archive. He pointed out that at this point in the 2013-2014 winter season, the region had had at least 15 inches of snow, and had had days with highs in the single digits. This season, by those measures, "We're still well below average," said Frydlewicz.

He added, however, "The time of the month to see single digits is still two weeks away." It was a reminder that it is quite possible for the current deep freeze to get deeper before a long term thaw.

More bitter cold is forecast for Saturday, with highs in the low 20s. Between now and then, the forecast calls for light snow.