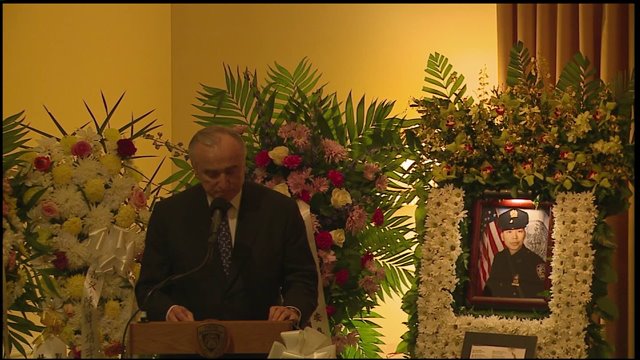 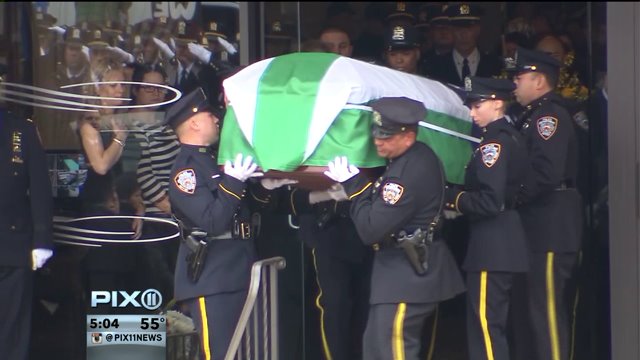 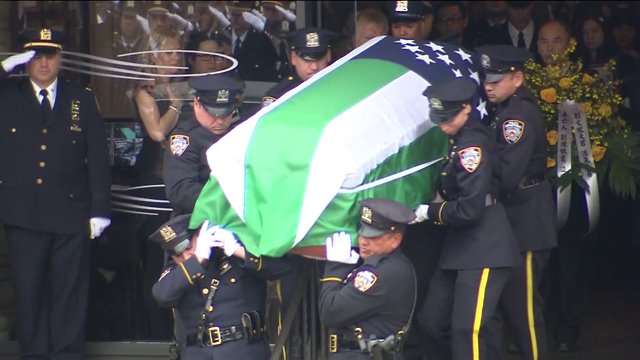 DYKER HEIGHTS, Brooklyn (PIX11) -- The second funeral for the NYPD detectives murdered by a mentally unstable man had a U.S. senator, members of congress and other dignitaries in attendance, but the most memorable image of the ceremony came from the thousands of law enforcement officers present, and the most memorable words came from the family of the man being funeralized, Detective Wenjian "Joe" Liu.

His widow, Pei Xia Chen, arrived at the Aievoli Funeral Home a full hour and a half before the remarkable service in which she would say her last goodbye.  Joining her outside of the funeral home, thousands of supporters from across the U.S. and Canada, both in and out of law enforcement.

"We knew we needed to come here to show support for the NYPD and all officers across the United States," said Corporal Tim Elsberry of the Concord Police Department of Northern California.

"This is heart wrenching," said Peter Yuen, a superintendent in the Toronto Police Department.  "I saw the family last night.  It doesn't matter how long you've been on the job, your eyes are wet.

"We have a large Asian population in Canada," he said, "and this has hit home to all of us."

Eddie Lee stood by on the sidewalk across the street from the funeral home.  He's a friend of Liu, who, by many accounts, was very fond of fishing.  "When he was done," Lee told PIX11 News, "he'd send some to my house, my family.  Very nice guy."

Those mourners made up sea of blue uniforms and some civilian clothes that stretched far beyond what anyone at the funeral home could see.  Aerial video showed that the formation of police extended more than a mile.

When the funeral began, FBI Director James Comey represented the Obama Administration.  "Detectives Liu and Ramos," he said, "just wanted to save lives."

He spoke of the impact on society from the cops' murder on December 20th by Ismaaiyl Brinsley, a man who was diagnosed as mentally ill.

Following Comey at the podium was Mayor Bill de Blasio, who spoke of how he felt Liu could best be honored.

"Let's renew the spirit of mutual understanding," the mayor said, in an apparent appeal to members of law enforcement, with whom he has had very strained relations since the execution style shootings of the two officers who were elevated to detective rank posthumously.

But De Blasio's appeal fell on some deaf ears.  Thousands of officers turned their backs to the mayor as his image was projected on Jumbotrons set up outside of the funeral home.  The mass silent protest was carried out despite a written request on Saturday from the police commissioner that officers not do so.

When commisioner Bill Bratton spoke at the ceremony, however, cops did an about face.

"Detective Liu is the cop we wanted, and the kind of cop we have," said Bratton, praising Liu and the entire department.

However, the centerpiece of the memorial were statements from  Detective Liu's Family.  His father, Wei Tang Liu, wept as he finished a eulogy he delivered completely in his native Taishanese Chinese dialect.  Still, it spoke volumes to the applauding crowd outside, even before a translator restated the speech.

"You are the best husband and son," the father said of his and his wife's only child.

"He's my soul mate," she said from the podium, "a wonderful husband, a friend, my best friend, and more."