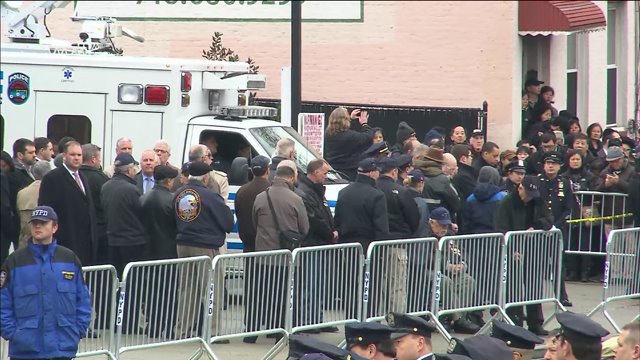 BENSONHURST (PIX11/AP) — Hundreds of NYPD officers have turned their backs once again -- this time at the funeral of slain NYPD Detective Wenjian Liu.

As New York Mayor Bill de Blasio gave a solemn eulogy at Liu's funeral, hundreds of police watching the service from outside turned their backs in a sign of disrespect toward the city's leader.

The officers' actions at Liu's funeral Sunday came after Police Commissioner William Bratton sent a memo to all commands urging respect, declaring "a hero's funeral is about grieving, not grievance."

Liu was killed along with partner Officer Rafael Ramos on Dec. 20. Their killer committed suicide.

The deaths strained an already tense relationship between city police unions and the mayor, who union leaders said contributed to an anti-police environment that allowed the killings.

Last weekend, hundreds of officers outside Ramos' funeral turned their backs toward a giant TV screen as de Blasio's remarks were being broadcast.