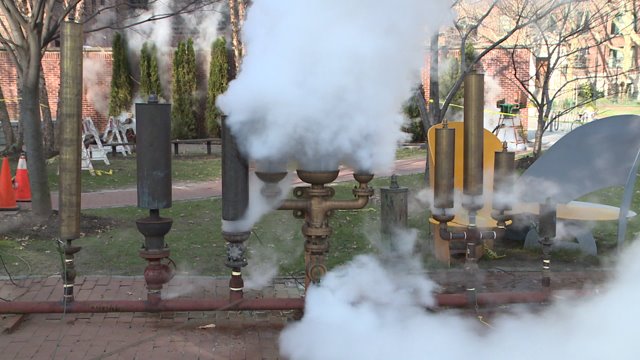 A bunch of steam powered whistles from a bygone era will ring in the New Year in Brooklyn one last time.

CLINTON HILL, Brooklyn (PIX11) -- A bunch of steam powered whistles from a bygone era will ring in the New Year in Brooklyn one last time.

The noisy tradition was started on the campus of Pratt Institute in the Clinton Hill section nearly a half century ago by  Conrad Milster.

“These are whistles  from ships, factories, railroad locomotives,” said Milster, who is Pratt’s chief engineer.  “The steam whistle was the sound of the Victorian era, so like other people, I collect these to preserve.”

The unique way to ring in the New Year has typically attracted hundreds to the campus.

“Normally we blow each (whistle) individually, and then we allow the public to blow them all at random, and it just turns into chaos, because you have clouds of steam drifting all over, and lots of noise, ear splitting noise, but it’s New Year’s Eve, what the heck,” said the 79-year-old Milster.

Milster was recently informed by the school that this is the loud ritual’s swan song.  A spokesperson for Pratt told PIX11 News that there’s not enough staff to supervise the public event which occurs during winter break.

“We’ve been coming out to see this for the last ten years or so, and I’m really sad to see it leave,” said Mona McNamara, who lives nearby.

Milster is hoping this isn’t the end.

“If there’s a groundswell of people notifying the school that they want this to continue, then I’m willing to continue, as long as I’m at Pratt,” he said.