New York pro sports teams give back this holiday season 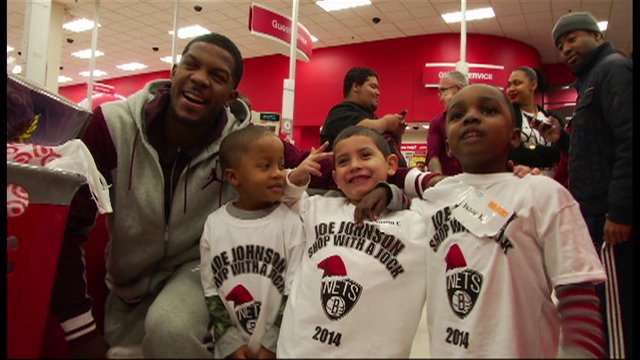 PIX11`s Scott Stanford shows us how New York sports team are giving back this holiday season.

From the court to the field to the ice, New York's top athletes are going above and beyond this holiday season.

“This is probably one of the best times of the year,” Joe Johnson said.

Brooklyn Nets forward Joe Johnson spent the day with underprivileged children as part of his annual 'Shop with a Jock' event.

“I grew up pretty much in a Boys and Girls club so I kind of know what it’s like for someone to come back and inspire us," Johnson explained. "It meant a lot to me so I just hope that I can be an influential guy on these kids’ lives.”

The entire Nets team stepped up to give back too as they hand delivered presents to dozens of kids in Brooklyn.

“It just gives you a great feeling to get to know these people, talk to them, take pictures and just hang out with these kids,” Brook Lopez, Nets Center, said.

Also helping kids get the gifts they want this year are the New York Islanders.

Several players picked out toys for children spending the holidays in the hospital.

“It’s a special time of year," Matt Martin, Islanders Left Wing, said. "It’s one of our favorite events to do!”

“You just try to get the best gifts you can," Josh Bailey, Islanders Left Wing, said. “I just try and think of a gift that I would’ve liked at their age.”

The fun shopping sprees continued with the New York Jets, as players helped dozens of kids pick out presents.

“It’s such a cool experience to come out here and run around with these kids,” Zach Sudfeld, Jets tight end, added.

“It’s definitely great to give back to those who are less fortunate," Marcus Williams, Jets cornerback, said. "Seeing all the kids run around here with smiles on their face, makes you forget about everything that’s going on/”

And from the other NFL team in town, punter Steve Weatherford of the Giants also got in the shopping spirit,

He spent the day with 50 kids at the East Hanover Target getting them new toys.

“[It's] my favorite event every year just being able to spend time with the kids, motivate them and inspire them,” Weatherford said.

The New York Rangers also helped out the less fortunate, They served holiday dinner at the Life Center homeless shelter.

"[It] puts thing in perspective, we play a game but the stuff that goes on here is real life," Rick Nash, winger, said. "It’s fun to help out here!”

Over at Citi Field dozens of kids got the hang out with the Mets and take home souvenirs and presents, as part of the team's annual kids holiday party.

“It’s really fun!" one of the school kids said. "I'm just glad to be here with all my friends, it's a really good privilege.”

The Yankees got in on the holiday action too. They turned part of Yankee Stadium into the North Pole for their 5th annual Bronx Winter Wonderland event, where the Bombers give out presents to thousands of kids, The team also prepared care packages to be sent to those serving in the armed forces.

And the Knickerbockers teamed up with the Garden of Dreams Foundation for a holiday shopping spree in White Plain,

So no matter the sport, the team or what they celebrate, all of New York's top athletes know that the best gift of all is giving back.