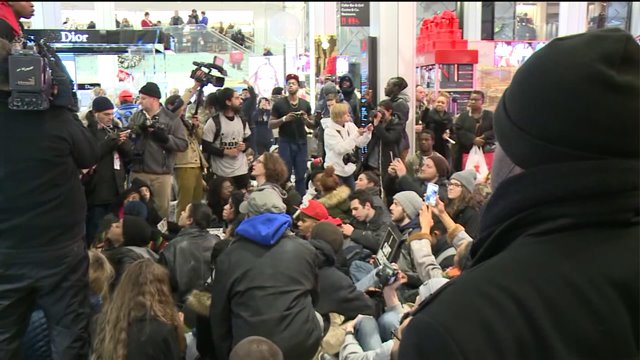 A variety of protesters entered at least a half dozen venues throughout Lower Manhattan and Midtown to express anger over the killings of unarmed black men during police encounters. 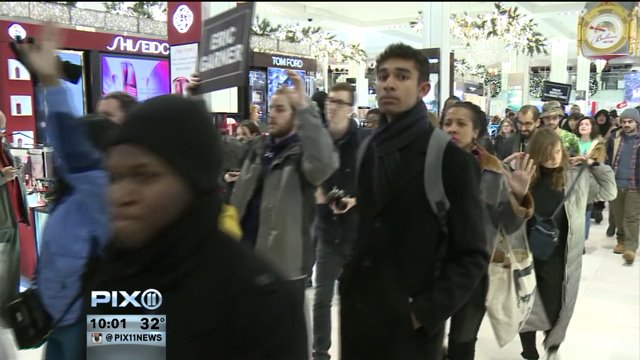 NEW YORK (PIX11) --From noon until late at night Sunday, a variety of protesters entered at least a half dozen venues throughout Lower Manhattan and Midtown to express anger over the killings of unarmed black men during police encounters.

While the numbers of demonstrators is down from days ago, the protesters still manage to disrupt significant public and private spaces, and can offer some indication of what a mass protest scheduled for next weekend may look like.

"This is our store!" yelled about 250 demonstrators after they filled the center aisle of the first floor of Macy's flagship store at Herald Square around 8:00 Sunday night.

Macy's is, of course, owned by the Macy's Corporation, but it is one of the locations where protesters stopped Sunday night, and not everybody was supportive.

"People are here to shop," said Darlene Joyce, one of many inconvenienced and annoyed Macy's customers. "They're here to enjoy thmeselves," she said, "not go like this."

Demonstrators blocked some escalators as they protested, both in a silent vigil in the store, and in vocal protest.

"While you buy, kids die," they shouted, as they marched out of the world's busiest department store.

They were on the move all evening. First from Union Square to Grand Central Terminal, where they staged a mass die in, followed by what they called a mass choke-in, in honor of Eric Garner, who of course died following a police take down last July that involved an apparent choke hold. Then they circled around the landmark Grand Central clock for about a quarter hour, as cops looked on.

"It's a tumultous time," said fellow demonstrator Jess Brokowicz as she marched with hundreds of others around the clock booth. "Black lives matter. This is important. It's important to be here."

She and her fellow protesters Sunday evening weren't the only people expressing frustration with the Eric Garner decision at Grand Central. Earlier in the day, around 3:30 P.M., the area around the central clock was filled with song.

"All I want for Christmas is an indictment," a couple dozen carolers sang in the middle of the terminal's marble floor. It was one of a handful of carols the group Justice Carols sang, with the lyrics altered to protest police brutality and injustice.

Also, around 1:00 P.M., a group of about a hundred protesters marched from Washington Square to Union Square where they, too, held a die-in.

Still, the biggest demonstration of Sunday, by far, was at night, shutting down Midtown streets, and clogging the entrances of five stores. In addition to Macy's, the 200 - 300 demonstrators slowed foot traffic at the Herald Square H&M, as well as theToys 'R' Us, Forever 21 and Disney Store in Times Square.

The group, who'd found one another via social media, also filled the central commuter hall in Penn Station.