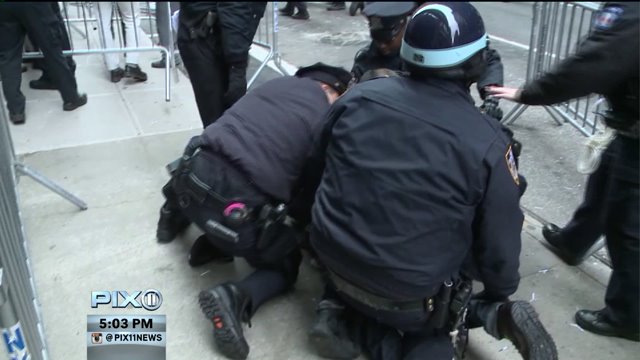 Police arrested seven protesters who broke from their designated route.

NEW YORK (PIX11) - Police arrested multiple people at the Macy's Thanksgiving Day Parade Thursday after a group of protesters broke from their designated route and clashed with officers.

Seven people were arrested, according to the NYPD, after they overturned a trash can and tried to run toward the floats.

About an hour before protesters were detained with hand ties, NYPD Commissioner Bill Bratton said police were prepared for any potential disruptions.

"We'll be prepared for that and let's hope they are smart enough and courteous enough to not engage in that activity today," Bratton said. "This is a national event, a historic event, anybody who seeks to interrupt it would be very callous indeed on this special day."

Roughly 50 protesters gathered Thursday morning and were allowed by police to walk from 5th Avenue and 42nd Street down to 37th street.  Once they reached 37th Street they were directed west along 37th Street, but instead turned around and tried to run east, back toward the Macy's route.

The NYPD took down several protestors who they say were not being cooperative with what was being asked of them and who were trying to make. it back into the parade route.

A total of seven protesters were arrested for disorderly conduct.

Some remained near 6th Avenue and 37th protesting peacefully.

The parade was never interrupted.

The group organized the gathering using the hashtag #stoptheparade on Twitter.  They held signs decrying the Darren Wilson jury decision and the recent deaths of Akai Gurley, Eric Garner and Tamil Brown, all of whom were killed by police officers.

Bill Muller contributed to this report.