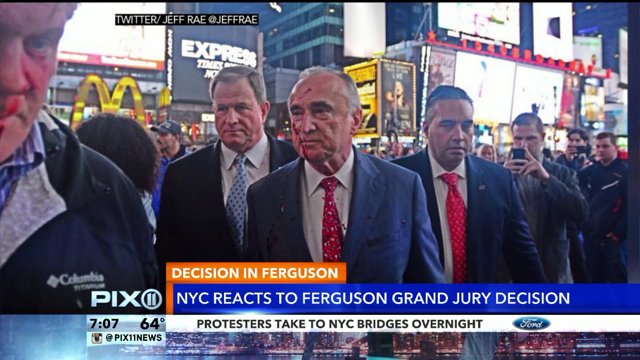 Police told PIX11 News that one person was arrested for allegedly throwing fake blood at NYPD Commissioner Bill Bratton during a protest in Times Square.

UNION SQUARE, Manhattan (PIX11) -- Protests that started in Union Square over a decision made by a grand jury in Ferguson spread quickly through Manhattan,  with thousands of protesters closing the Brooklyn and RFK bridges.

Protesters also marched over the Manhattan Bridge before dispersing.

Police told PIX11 News that one person was arrested for allegedly throwing fake blood at NYPD Commissioner Bill Bratton during a protest in Times Square.

In the wake of the NYPD shooting of Akai Gurley in a Brooklyn public housing complex last week, and lingering anxieties over the Eric Garner police chokehold death in Staten Island a few months ago, the protest in Union Square over the Ferguson grand jury decision was tense and with an an anti-police message, but it was largely peaceful.

"No indictment!" a protester shouted out as word from the Missouri courthouse began to spread. There was, at first, a stunned silence, followed by anger.

"This is a slow genocide," said Jamel Mims, who said he was a member of the New York Revolutionary Club.

"This isn't about 'everybody,'" said protester Camonghne Felix, referring to one of the themes of protest in the wake of Michael Brown's shooting. "If white people want to be allies, they need to understand" that demonstrators' outrage was due to repeated police attacks on black males.

A crowd of more than a thousand people sang "One Love," by Bob Marley, although a subgroup of protesters demanded that they also sing "Stand Up For Your Rights," a more forceful Marley song. It didn't happen.

There was also a four-and-a-half minute moment of silence, that was, demonstrators said, in keeping with the wishes of the family of Michael Brown.

Then as the crowd began to disperse to other locations, including Times Square, tensions rose.

Dozens of demonstrators pushed over metal police barricades, as dozens of NYPD officers assigned to keep order looked on, ensuring that nobody was hurt, but making a clear effort not to interfere.

The grand jury decision came down at 9:02 p.m., and by 9:45 p.m., Union Square was clear of protesters. A march and demonstration that had begun two hours earlier and had featured such taunting chants as "NYPD, KKK, how many kids did you kill today?" broke up, frustrated and anxious, but without violence.