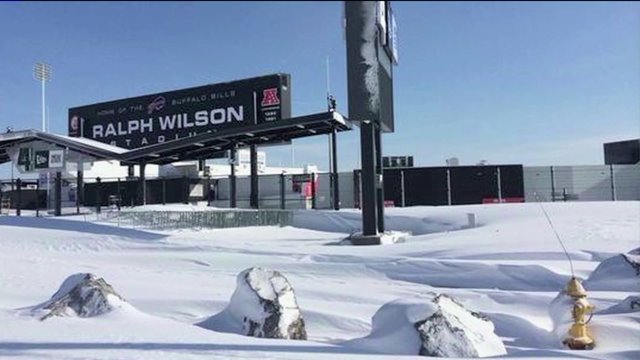 After a deadly snowstorm socked western New York, the NFL announced Thursday that this Sunday`s game between the Buffalo Bills and New York Jets will be rescheduled and/or relocated.

NEW YORK (PIX11) - After a deadly snowstorm socked western New York, the NFL announced Thursday that this Sunday's game between the Buffalo Bills and New York Jets will be rescheduled and/or relocated.

PHOTO: The inside of Ralph Wilson stadium under a thick blanket of snow and blowing drifts. pic.twitter.com/7Hg3gFcOMI

The team officials called the amount of snow they need removed "unprecedented," and estimate the combined weight at 220,000 tons -- enough to fill the team's practice complex eight times over.

With the forecast of more snow for Thursday, the Bills even tried to recruit fans at $10 per hour to shovel out Ralph Wilson Stadium.

It's not clear when and where the game will go down, but the NFL says it will happen during this upcoming Week 12.

"Due to public safety concerns in light of the ongoing weather emergency in Western New York, Sunday's Jets-Bills game will not be played in Buffalo," said NFL spokesman Michael Signora in a statement. "We are in the process of rescheduling and relocating the game as part of Week 12. We will provide additional information as soon as possible."