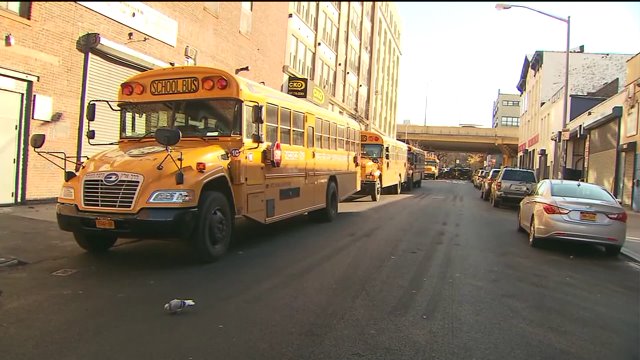 FORT GREENE, Brooklyn (PIX11) -- Most of this area south of the Brooklyn Navy Yard is zoned industrial.  Waverly Avenue is dotted with warehouses, a dry cleaning plant, and some light manufacturing facilities.  In the middle of it all is a school, housed in a century-old factory building.

The United Talmudic Academy is founded on the principles of the Talmud, the written collection of Jewish law and tradition which, among many messages it imparts, encourages consideration and kindness toward one's neighbors.  A long and growing list of complaints against the school for boys indicates that its  consideration to its neighbors is heavily questioned.

In multiple complaints filed with the New York City Department of Buildings against United Talmudic Academy, or UTA, the educational institution is listed as an illegal school.

A recent complaint also shows that construction work has been done at the school at 2:00 a.m. on a Monday, while some neighbors were trying to sleep.  Currently, a stop work order is in effect at the facility at 25 Waverly Avenue.

Department of Buildings records also show that so far this month, 17 complaints have been filed against UTA.  Among the alleged offenses are failure to properly maintain the building, and construction work on an elevator shaft without a permit.

But the most common complaint against the school involves it using the street on which it's located as a de facto parking lot for school buses all day.

"They just have buses blocking the whole block," said Teddy Ma, a warehouse operator based a few buildings away from the school.

In fact, PIX11 observed a line of buses parked in front of the school, jutting so far out from the curb that traffic was only able to pass with difficulty, patience from drivers, and very slow speeds.  And the buses are parked there all day.

The factory-turned-school has three different entrances.  PIX11 News went to each one, and at two of the doors, men who appeared to be administrators peeked out, only to slam the doors without allowing PIX11 News to ask any questions, let alone have them be answered.

And it's not just PIX11 News that has been unable to hear from the operators of the United Talmudic Academy.  Department of Building complaint reports show that on more than one occasion, NYPD officers from the local precinct have been unable to enter the facility when they've responded to complaint calls.

Currently, the school, which has been in operation for at least 12 years, is attempting to obtain a permit from the city to operate in an industrialized area.  Complaints against the institution have increased as the area has become more developed in recent years.