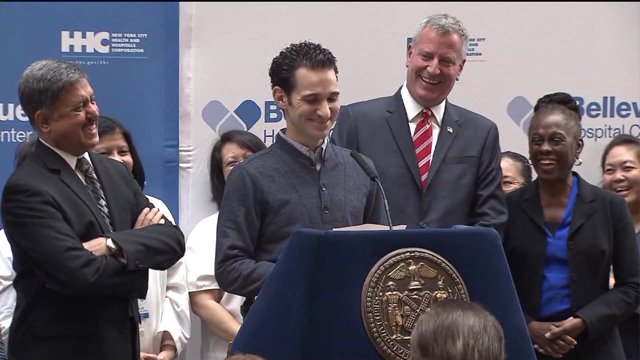 After weeks battling Ebola at a New York City hospital, a doctor who treated patients in the outbreak zone in West Africa is being sent home, a survivor of the often-deadly virus.

MANHATTAN (PIX11) -- After weeks battling Ebola at a New York City hospital, a doctor who treated patients in the outbreak zone in West Africa is being sent home, a survivor of the often-deadly virus.

Dr. Craig Spencer, 33, came down with Ebola after returning to the city from West Africa. A physician at NewYork-Presbyterian Hospital/Columbia University Medical Center, Spencer had traveled to Guinea with the humanitarian group Doctors Without Borders in September and left Oct. 12.

He tested positive for Ebola -- for which there is no known cure -- on Oct. 23 and underwent treatment at Bellevue Hospital, one of eight hospitals in New York State designated to take on possible Ebola cases.

"My early detection, reporting and now recovery from Ebola speaks to the effectiveness of the protocols that are in place for health staff returning from West Africa," said Dr. Spencer during a news conference attended by hundreds.

"It feels good to hug a hero, and we have a hero in our midst," de Blasio said.

Spencer took an active role in his treatment, doctors said, and carried his “terrific sense of humor” through his recovery. He played a banjo to pass the time while in isolation.

Spencer and city leaders repeatedly said that while his recovery is a success not to be undermined, the true Ebola crisis is not in the U.S. and urged the public to "refocus" its efforts on eradicating the virus from West Africa.

For more than five weeks, Spencer worked at an Ebola treatment center in the epicenter of the outbreak.

"During this time, I cried as I held children who were not strong enough to survive the virus," he said. "But I also experienced immense joy when patients I treated were cured and invited me into their families as a brother upon discharge."

More than 8,000 cases of Ebola have been confirmed worldwide, with nearly all of them in Guinea, Sierra Leone and Liberia, according to the latest numbers from the Centers for Disease Control and Prevention.

After Spencer's diagnosis, city health officials stressed that Ebola, though highly infectious, is not highly contagious and is extremely difficult for the general public to catch.

Part of the city’s initial nervousness stemmed from Spencer’s eventful night out before he became symptomatic, including a 3-mile jog, a trip to The Gutter bowling alley, a ride on the subway and a visit to a West Village restaurant.

But city health commissioner Dr. Mary T. Bassett said the chance of anyone catching the virus from Spencer's travels were "close to nil." Ebola is spread only through direct contact with the bodily fluids of an infected person who is showing symptoms.

Mayor Bill de Blasio commended Dr. Spencer for the manner in which he tackled the deadly virus. "He showed us an example of strength, courage, dignity, humor... humor amidst it all."

Spencer shared those laughs with a group of people that nearly three weeks ago were complete strangers, but a group that he now views as friends as well as lifesavers. "I wanted to start by taking a moment to thank the medical team here at HCC, Bellevue hospital center, for the tremendous care and support they have provided me to survive this virus."

Each U.S. health care professional who contracted the illness had direct contact with Ebola patients who were actively ill, and no members of the general public have been infected.

Hospital staff at Bellevue who treated Spencer are self-monitoring at home, taking their temperatures twice daily with the promise to report any Ebola-like symptoms immediately.

Two nurses in Dallas contracted the virus while treating a now-deceased man from Liberia. Both have been deemed Ebola free and released from the hospital.