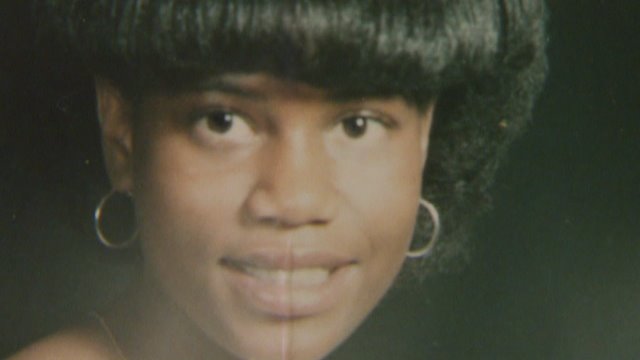 Bishop James Burrus wasn`t expecting a visit from PIX 11 Investigates, when we knocked on the security gate of his By Divine Purpose Christian Center on Delafield Avenue recently.

STATEN ISLAND (PIX11) -- Bishop James Burrus wasn’t expecting a visit from PIX 11 Investigates when we knocked on the security gate of his By Divine Purpose Christian Center on Delafield Avenue recently.

It’s been 34 years since NYPD detectives first questioned him about the strangulation of 19-year-old Lorraine Snell, a legal secretary from Brooklyn who was related to his then-wife.

“Who?” Burrus asked us quizzically when we brought up Snell’s name.

When we mentioned Snell was his cousin-in-law, that’s when Burrus acknowledged the teen was related to his ex-wife.

The 19-year-old had left her mother’s home on East 39th Street in Brooklyn to make plans for an engagement party at the Midwood Terrace, which used to be located on Flatbush Avenue.

A bartender there told police she saw Lorraine Snell leave with Burrus, who was trying to walk her home in the rain. Snell was said not to be interested.

“We did leave the building together,” Burrus told PIX 11 Investigates, when asked about details of that night. “I walked her, I believe it was, on Clarendon Road. A few blocks from her house, I went one way, and I watched her go up by her block.”

Lorraine Snell’s mother, Pearl Holder, now 76, has never believed Burrus’ story. Homicide detectives have been troubled by it, too.

Lorraine Snell’s body was found at 4 p.m. on Sept. 25, 1980, inside an abandoned station wagon near the Newkirk Avenue subway station in Brooklyn.

The vehicle was located behind a supermarket where Burrus used to work. Snell had been strangled, and a car cable was tied around her neck. Her shirt had been pulled up.

Lorraine Snell’s mother had passed near the site, to take the Newkirk Avenue subway, about 10 hours before her daughter’s body was found.

Pearl was working as a dietician at a Brooklyn hospital, but she returned home early, amid serious concerns her daughter had met with foul play.

“So that’s when he started giving me the story,” she said of Burrus, that “he saw Lorraine that night and it was raining and he tried to walk her home and Lorraine was very hostile to him.”

Burrus admitted to PIX 11—and to police in 1980—that he robbed a cab stand that September night, and he went to prison for that crime.

The family—and some detectives—think the robbery provided an alibi for Burrus.  He told PIX11 that’s not true.

Burrus said he was transformed in jail.

"I just got into Christ in the prison,” Burrus said to PIX11, “and now it’s just my life.”

Burrus recounted he was with the Church of God and Christ but “then I went independent.” He is a gospel singer and musician and hosts a Saturday radio show on WSNR 620 AM.

When we told Burrus that Pearl Holder still thinks he holds the answers to her daughter’s death, he responded, “If that was my child, I would want answers, too. I don’t have the answers, what can I tell you?” Burrus said.

When PIX11 asked him outright if he killed Lorraine Snell, he responded, “Absolutely not.”

“Absolutely not” is an answer he used multiple times, including when we asked if he tried to rob Lorraine or had a romantic interest in her.

“Me and Lorraine was friends,” Burrus said. “She was a sweet person.”

Pearl still grieves for her daughter and cried when she took us back to the site where her daughter’s body was discovered more than three decades ago.

She told us Lorraine had been very active in her church choir.

Born in Panama, Lorraine Snell came to the United States when she was just six months old.

Snell’s younger brother, Wayne, was just 7 years old when his sister was killed but tearfully recalled, “I was little but I can remember.”

Snell’s older sister, Leticia, is turning 60 years old and told us Lorraine would have been 53, if she’d lived.

Leticia used to relish the role of big sister.

“When she started school, she knew her alphabet, her colors,” Leticia said.

“My heart is still aching,” she told PIX11 Investigates. “It’s 34 years, but it seems to me like yesterday. I can’t get over it."