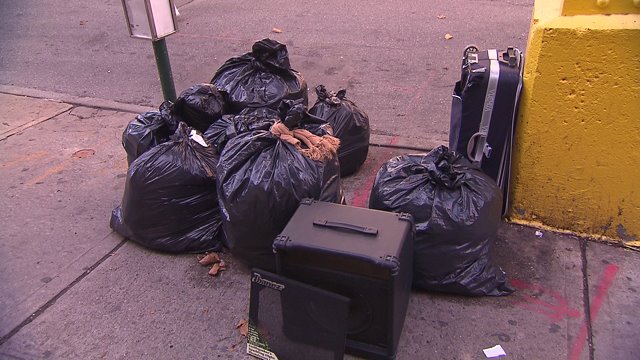 The enforcement agents, they say, are slapping the businesses with $100  tickets in the middle of the night.

“We really think something is going on a little underhanded with the Department of Sanitation," says dentist Russel Karmel, who has had an office on Jamaica Avenue for more than 20 years.

He says local merchants know they’re responsible for keeping the sidewalks outside their businesses clean, which isn’t easy with all the illegally dumped trash on Jamaica Avenue. When the dumping occurs during the day, the merchants clean it up. But what really has them ticked off are the tickets issued in the overnight hours.

Blenkinsopp says the Association’s storefront was recently slapped with a violation at 3:30 in the morning for having an illegally dumped mattress on their sidewalk. “We’re the block association. We care about a clean community. That’s what we do. We wouldn’t dump outside our own storefront."

The local Radio Shack was ticketed at 1:40 on a Sunday morning for having cardboard boxes on its sidewalk. Karmel Dental’s violation for illegally dumped household waste was written at 2:00 a.m. "What do you want? For us to hire someone to come by and sweep at 3 in the morning every single day?” asked Blenkinsopp.

Some merchants have fought the tickets and won, but only after going to court. “I can’t afford that, take a day off and cancel patients,” says Russell Karmel. “So they count on it. They know that people are gonna pay it because it’s a nuisance.”

Last year, Bill de Blasio, while he was still Public Advocate, called the middle of the night ticketing “unreasonable." So why is it still going on? Mayor de Blasio refuses to answer. His office referred us to the Sanitation Department , which also declined to address our questions.

The Woodhaven Resident’s Block Association believes the reason it’s been so difficult to get the Sanitation Department to end the middle of the night ticketing is a matter of money. “My best guess is they have some sort of quota and they figure that this is raising revenue for the city and therefore it’s a good thing to do. But it’s obviously not fair," says Blenkinsopp.

After PIX11 Investigates called the Sanitation Department, they scheduled a meeting with the block association for this Thursday. The department says is has also reminded it’s agents on the overnight shifts to use common sense in issuing violations.

It’s a shame they had to be reminded of that.