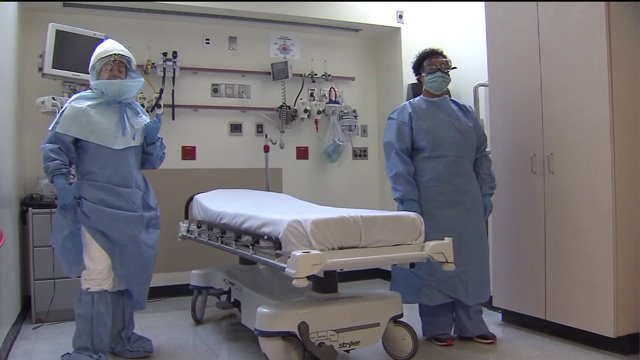 NEW YORK CITY (PIX11) -- "I think no hospital in the world is more able to handle crisis than Bellevue."

It is a bold statement, yet one that Mayor Bill de Blasio said with conviction during a news conference Friday held specifically to update the city on its first Ebola patient.

At one point, the mayor made it a point to remind New Yorkers of the possibility of getting infected.

"Ebola is an extremely hard disease to contract."

"The level of preparation and training and practice here is an entirely different dynamic, and again, you're talking about Bellevue, which is one of the world's most capable hospitals when it comes to challenges and crisis."

However, what about the properly trained nurses, who according to the New York State Nurses Association, volunteer to deal with patients like Dr. Craig Spencer?

"The people who are being trained to take care of this patient right now are highly skilled, experienced and very trained nurses.  They've been training for the last two-and-a-half months, putting on the 'pp' taking them off and making sure what needs to be done."

However, following the infection of a nurse in Spain, along with the two nurses in Dallas who contracted the virus and the concerns generated when it was revealed that one had traveled days following treatment, PIX 11 News asked Dr. Raju if the nurses who are treating Dr. Spencer on the seventh-floor isolation unit at Bellevue are being isolated or monitored after their shift. He did not answer the question directly, but Mayor de Blasio did answer with the following:

"We need the best people, the most capable people, doing this work and we need to protect them but they also do have the rest of their lives and so long as they are taking those precautions, we can make that work."

After the news conference Dr. Raju did ultimately confirm that the nurses are allowed to go home after their shift and self-monitor, which is exactly what Dr. Spencer was doing after he returned from his trip to Guinea.

The union representing the nurses did confirm that the trained nurses who have volunteered to take care of Dr. Spencer are given an option to stay at the hospital or go home.

Late Friday afternoon, a city official told PIX 11 News in an email that all employees in contact with Dr. Spencer are kept in a log.  They are also given an information sheet on what to do. Additionally, they will subject themselves to twice daily monitoring and they are instructed to go to the ER if symptomatic.